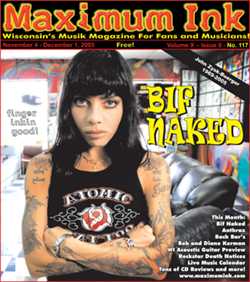 “I’m a real gullible girl and I always believe anything a boy will ever tell me. I get suckered a lot, but always get back up on the love horse,” she explains when discussing the songs on her latest album, Superbeautifulmonster. “I just came off a big heartache and was enshrouded in despair when I wrote [album tracks] ‘Abandonment’ and ‘After A While’. I like to think that I better my efforts, my songwriting, and singing with every record and this one’s a little darker and sadder, it’s much more guitar-oriented. There’s something that everyone can relate to. I’m crazy about love, crazy about the whole process. I keep getting knocked down, but I keep getting back in the ring.”

Born in India and adopted by missionaries, Bif describes her youth as “kinda like an army brat’s” as her family moved to different areas like South Dakota, Minnesota, and later Canada, her love of performing started with ballet class with her sisters and has led her to several North American and European tours and even a Tonight Show performance. “It’s all I’ve done since I was 18,” she says. “I think of North America as ultimately one country, everyone likes the same bands and there’s the same political opinions. Sometimes, the people in the US are a little more forward and gregarious, Americans want to hug you.”

And she picked one of America’s favorite metal bands to cover for Superbeautifulmonster. “As a girl, James Hetfield was singing the ultimate love song to me [in Metallica’s “Nothing Else Matters”]. It was like he was saying, ‘you and me against the world’. We always covered it in soundcheck and Dave Fortman [Evanescence’s Grammy-winning producer] wanted to do it with me specifically, so we put it on the album.”

Bif’s always on the road (“In a perfect world”, she says, “we’d like to do 365 shows in a year.”) and once again promises the audience a high-energy rock show on this tour (where she’s currently supporting Default), “Ultimately, on film, you’re doing what the director’s asking you to do. A live show is all about freedom and we come out with all cannons firing, it’s definitely a rock show. If I don’t sweat, I don’t feel like I’m doing my job.” As for the future, she plans for more of the same. “I’ll still be touring, but maybe with a baby on my hip.” She laughs, “Maybe I’ll be an honest woman, but I’ll probably die trying.”