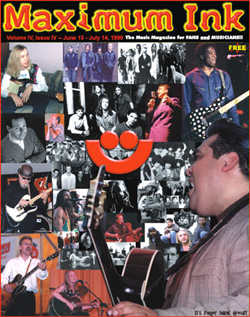 Robert Williams, AKA Big Sandy, seemed to pick the right time to take a sabbatical from touring. Last year, at the height of the neo-swing movement, he was relishing in a solo west-coast doo-wop album, while his Fly-Rite Boys bandmates were soaring through a guitar pickin’ jamboree heavy on instrumentals. So instead of trying to lose the albatross that “swing” has become to some, Sandy and his band have picked right up where they left off - if not a few steps ahead for the rest. “I’ve been trying to be careful to not align myself too closely to any one scene,” he said in a recent telephone interview. “When I first started, I didn’t want to be part of any scene, but rather to create my own scene. Trends come and go, but we’ve continued to go along. I’m glad we’ve done it that way.”

That way has covered more than a decade as the Southern California-based group has criss-crossed the United States and Europe, building a following for up-tempo western swing and smooth hillbilly jump tunes. But while he edges away from typecasting in the retro mode, Sandy has built a growing group of followers in that camp – while also building awareness of the fruitful legacy of artists such as the Maddox Brothers, Boyd Bennett, and Merle Travis. “In general, the Europeans were ahead of Americans in knowledge of the music when I first started,” he said. “But having some of these trends has helped increase awareness in America of the traditional styles of music.”

The European head start is strongly represented in the group, as three players—guitarist Ashley Kingman, pedal steel player Lee Jeffriess, and pianist Carl “Sonny” Leyland - hail from England. Completing the balance are bassist Wally Hersom and drummer Bobby Trimble. “That’s really funny,” Sandy reflected. “If someone had told me when I started I’d wind up with a band that’s half-British, I’d never believe it. But through coincidence, we hooked up as I got to know them and others in Europe. We have our cultural differences, but they aren’t as big as what we have in common. We’re all about the same age, and all grew up listening to the same reissue albums of rockabilly and R&B.” But to make the group work, it had to be based in the States. “It seems that there’s a greater appreciation over here of blending styles, Sandy said. “They’re fanatical in Europe about the music, but they don’t want you stepping outside of the original style. That may be why rock came about in the first place - that the initial creation had to happen here, because only we will blend styles.”

Finding subtle ways of bringing in other influences remains a top goal of Sandy in his future song crafting. “We’re still trying to find the right voice for the group,” he said. “We want to weave a variety of traditional styles into something that’s distinct and different from what’s come before. In the past, we tried to pinpoint a style for a song - focusing on specific sounds. Now, we’re letting our guard down, playing around with the various influences, especially when we do large festival shows. It’s a lot more fun for both the band and the audience.” An early inkling of that direction is “Radio Days, a six-track “EP-CD” on Hightone. Between the low-fi transistor radio pictured on the cover, the graphics on the inside, and the music on the disc, it’s an impressive return to the days of the Eisenhower administration. “I had the general idea for the disc, but Johnny Bartlett, who used to be with the Phantom Surfers, really took the idea and ran with it,” Sandy said.

That backdrop is more than appropriate for Sandy, whose catchy songwriting and smooth vocals seem tailor-made for fusing the frantic passion of rockabilly with the smooth, suave subtlety of R&B. But for the summer, Sandy and his five compadres will be cruising through the Midwest in their vintage bus not once, but twice. “Then it’s back to California, to Europe for awhile, and back to the States in time for the holidays,” he said. He also hopes that he’ll get another chance to follow in the footsteps of his mentor, Dave Alvin, who produced two earlier Fly-Rite Boys releases. “I had the chance to work with Kim Lenz, writing a song for her and producing her album. That was my first test in producing, and I really enjoyed it - I hope someone else calls to ask me to do it again,” Sandy said. But meanwhile, he looks forward to a string of Midwestern show dates, including Madison’s Memorial Union July 1, Summerfest in Milwaukee on July 4, Taste of Chicago July 5, and Milwaukee’s Rainbow Summer July 6. “I’m not trying to go out an preach the gospel of rockabilly,” Sandy said, “but I just really get off on playing the music. I really go crazy on stage - performance is my passion. I’m not out to present myself as retro, but just want to draw from that era. “