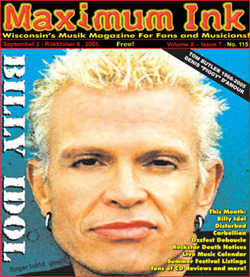 Billy Idol on the cover of Maximum Ink

Maximum Ink:  Why the 12-year gap your fifth album, Cyberpunk, and your sixth, Devil’s Playground?

Billy Idol:  When I started, I realized that punk rock was about giving you freedom inside a system that wasn’t allowing you to breathe. The system wasn’t giving you a future you wanted. So, in the mid’ 90s, after Chrysalis was bought by SBK and they were bought by Capitol/EMI, it went from being the independent label I liked to this big corporate machine. I hated it.  It was nothing to do with the music; it was all to do with the record company and the fact that there was no one who believed in me inside the record companies. My music wasn’t that badly off it just needed to regenerate itself, but it didn’t’ need to be regenerated with a bunch of idiots who didn’t understand it or weren’t in love with Billy Idol. That’s what I was coming up against. Corporate America who had no love for someone like myself, just someone who made a lot of money, not someone who could mean something after 20 years. They’d been telling me I couldn’t do that. “You can’t be Billy Idol anymore, you have to be Billy Idol light.” I knew as well, that my instinct was gone. I knew, let’s just put the brakes on until I get it back. Not to even worry about that question. I couldn’t go hunting if I couldn’t follow the signs. I couldn’t follow the animal to see where it went. Then I realized I was stopping for all the right reasons. It was freeing. I didn’t take a break because I was over. I took myself off the market. I could have gone on making records.  I had a big contract.  I knew MTV was gone for me, but I could have made $1 million dollars a record just out of the money they give you to make a record, but I would have ended up owing the record companies millions of dollars because those records wouldn’t have gone anywhere.  By waiting, living my life, getting the right situation, the right band. The thing that saved me in a way, was finding out that the things I love do have value to me. Maybe not to someone else. Because I do love music. Because I love riding motorcycles. The two go together. Because I believe in the past and believe in the future.  Now, I can tell everybody I did made an album for the right reasons. Merck at Sanctuary asked me to make this record. He didn’t ask me to make a record that will sell 10 million units. He just said, ‘Billy, will you make me a great Billy Idol record?” I said, ‘yes, and I think I’ve done it.’

Max Ink:  One could say that you were one of the first twenty punk rockers in the world.  Ever see any of the old gang?  Do you ever hang with (former Sex Pistol guitarist) Steve Jones in LA?
Billy:  Punk still is and always was about breaking the rules, whatever they are at the moment, as long as you don’t hurt anybody. At least that’s what punk is for me. I was more friends and still am friends with (Siouxsie And The Banshees bassist) Steve Severin. As to Steve Jones, well we see each other a lot when I’m home in LA. As a matter of fact, he had me on his radio show on Indie 103.1 when DEVIL’S PLAYGROUND came out. And he came up to my fans-only Roxy show in LA, and played on a couple of songs. He’s a good mate.

Max Ink:  Back in about 1979, you said something to the effect that “big rock stars take limos after the show – I take the tube.”  When was the last time that you took the subway?
Billy:  Well, I live in Los Angeles. I ride my motorcycle, pretty much everywhere. In NYC, if I’m not working (where we usually are in some kind of car) I walk. Actually it drives Toast, my security guy a little crazy, cause I really like walking. We walked from the Tower autograph signing to the gig. You can’t really live like a regular person, when people are asking for your autograph and stuff.

Max Ink:  Are you going to make any more movies?
Billy:  I just did the voice for an animated movie. And yeah, well I’d like to do more movies. The only really big part I lost, was the role in the Oliver Stone movie, The Doors, as Jim Morrison’s best friend. I had my motorcycle crash and was in the hospital so Oliver rewrote the part for me, it was very small afterwards, and I did it on crutches. It was disappointing. Doing music is always first for me.

Max Ink:  What is in your CD player right now?
Billy:  A bunch of stuff from the Warped Tour and Lollapalooza, which I did, this summer - HorrorPops, Dropkick Murphys, Kaiser Chiefs, lots of reggae.

Max Ink:  Who do you think is the coolest band out there?
Billy:  My son’s band.

Max Ink:  What advice would you give a young rock singer coming up these days?
Billy:  It’s tough these days. The music business takes the soul out of you. I’d say be honest and straightforward, don’t disguise what you’re doing, don’t hide anything from your fans. Stick to what you believe in.