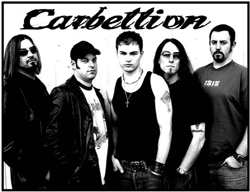 American Heavy Rock, it’s the title of southeastern Wisconsin band, Carbellion’s first EP and according to lead singer, Cameron Kellenberger, the most apt description of their music. “Thematically, a lot of the songs are pro-United States, American culture”, he says, “heavy rock is a tag we put that just kinda stuck.”

Formed from the ashes of Milwaukee metal stalwarts, the Carbon Parlor and Whiskey Rebellion, Carbellion is a mash-up of the two former band’s names. But Cameron likes to tell unsuspecting fans that it’s a Spanish ghost-ship, a matador-killing Mexican bull, or a Civil War soldier. Carbellion has already played many of the Midwest’s biggest cities in support of bands like Corrosion of Conformity, Clutch (who the band feels are musical brothers-in-arms), and Alabama Thunderpussy. “Kicking back and having a beer with your friends goes a long ways, we’re influenced by a lot of southern rock values, even though we’re from the North.”, Cameron says. But those values, including the show-must-go-on mentality, are part of what makes them unique. Before their March 2005 Bomblastica show in Racine, their rhythm guitarist Brandon broke his ankle and was headed to the emergency room when he realized that he wouldn’t make it to the show in time. Like a rock and roll champion, he sucked it up, put on a few extra pairs of socks, and played the show, waiting until afterwards to go to the hospital.

As for the future, Carbellion, is headed to the studio for another EP release that they can shop to record labels .They’ll be bringing their huge whiskey-soaked riffs to Madison on September 10th at the High Noon Saloon for Bomblastica 2005.5.