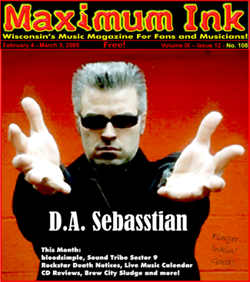 D.A. Sebasstian on the cover of Maximum Ink in February 2005

It has been a long road for D.A. Sebasstian. Starting in the early 80’s with the Southern California punk band, XIJIX to the Latin tinged avant-garde Freaks Amor, to the wildly successful industrial band, Kill Switch…Klick, Sebasstian has never let up on his artistic vision, no matter how many times it bites him on the ass.

Sebasstian first tasted success when Kill Switch…Klick, was signed to Cleopatra Records, releasing the classics “Beat It To Fit, Paint It To Match,” and “Degenerate.” They also appeared on 19 compilation CD’s.

Two short years after becoming a cult rock star, Sebasstian found himself without a drummer and in debt. “I owed Cleopatra (records) all kinds of money,” explained Sebasstian. He decided to start a record company, first calling it “Irregular,” and then changing the name to “Go-Kustom” after hearing of another “Irregular” label. He then proceeded to release titles from artists Kill Switch…Klick, D.A. Sebasstian, The Penningtones, Circle Of Fifths, Bill Wolford’s Head, Exposure To Living and Drag Strip Riot.

Go-Kustom hit the wall when “Hold The Vocals, a Tribute To The Instrumentals Of The 50’s 60 & 70’s” was getting pressed. “Redeye Distribution said they wanted the title,” said Sebasstian. “I borrowed money from a credit card to press it and while the CD is at the pressing plant, I get this form letter from Redeye saying they were not going to pay on their label accounts, because Valley Media (Redeye’s biggest customer) had gone bankrupt. They did return all my unsold CD’s (over $12,000 wholesale), however they still, 3 years later, haven’t paid me for two previous years worth of sold discs.”

Most people would of given up on the business, sold their equipment and move to a cabin on Lake Superior, but Sebasstian, who is married and a father of two, stepped right up and started a Rock and Roll/Hot Rod Auto show called “Go Kustom TV” on Seattle’s public access station, Channel 29. “I wanted to start making films and I figured doing a TV show would teach me to edit and film and all that,” said Sebasstian. “I went out and bought two little Sony digital camcorders and a Mac G4 with Final Cut Pro and got to work.”

“Go Kustom TV” became a cult hit, which leads Sebasstian to his next medium - film. Last summer, Sebasstian started filming “Hot Rod Girls Save The World,” a campy B-budget zombie film with great music and starring a lot of musicians and people associated with Go-Kustom. “We’re about 1/4 done filming and should wrap it up and start editing and post production by fall,” said Sebasstian.

Besides finishing the filming of “Hot Rod Girls Save The World” and another season of “Go Kustom TV,” Sebasstian is reforming Kill Switch…Klick and recording a new CD. “It is like climbing to the top a mountain,’ said Sebasstian. “Only to realize you were actually only at the top of one of the foothills of an even bigger mountain.”