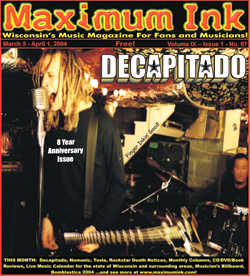 Most bands worry about making music to appease and please the masses. Not so with Decapitado. This Milwaukee trio is focusing on originality in an effort to maintain their sanity and produce high quality art. These guys are not newcomers to the music scene by any stretch. Each is currently in at least one other band outside Decapitado and each has been in several others before this as well. Bands like Fuck Face, Custom Grand, Boy Dirt Car, and Die Kruezen to mention a few.

Dan Kubinski (vocals/bass), Andy Keels (guitar) and Charles A. Mayer (drums) are Decapitado. Starting at the top, Andy fills us in about the band name. “The word decapitado appears in a newspaper clipping in the movie “Curdled.” I thought it was such a cool word. My wife said it would be a great band name. I was in three bands at that time, and this one fit the name best. The name symbolizes the world today; a lurching, twitching body, lumbering forward, unable to hear or think or see. It stands for the way too many of us live our lives.”

“Everything from art to relationships seems to be disposable these days in our society, and that really kills me,” says Dan. “Nobody stands behind what they say anymore, nobody wants to do anything the hard and correct way, only what’s easy and takes up the least amount of time. That absolutely drives me crazy.”

The new album is done the correct way. Titled “Blacked,” it is bleak, heavy and intense yet also hard to categorize. Just how does the band describe its’ music to someone who has never heard it? “That’s a tough question, especially for a band that somewhat prides itself on being different and purposely straying from the path,” says Dan. “I would have to say that we sound somewhat like how you feel after having really great intense sex, mixed with smashing your finger with a hammer,”

“I like angry sounding music,” adds Charles. “I like the way drum beats and patterns can have an effect on ones feelings, and I like to take my aggression out on my drums and express it through the music.

Where does inspiration come from? “It comes from wanting to shout down all the fucked-up shit that happens,” says Andy. “Too many good people are silent, and the world is so loud and big, only the loud and the heavy can be heard. Don’t you want to tell that jet plane to shut-up? We all want a voice that will shake the world. We all want to be heard.”

Speaking of being heard, what other events are slated for the band? “I’ve been communicating with a video company on the east coast,” Dan says. “We might get into some serious video things in the coming weeks and months. We are busy writing material for the follow up to “Blacked” which is going well. We are thinking of releasing a 7 in. record next fall as a teaser to the next full length.”

How about some sage words of wisdom to those bands just starting out?:

Andy, “You have to stick with it, no matter what you’re up against: car crashes, mental illness, soured friendships, whatever. You have to have loyalty to your band mates. Band is a noun and a verb - ‘to join together for a common purpose.’ If you are best friends with the people in your band, people can hear that in the music.”

Charles: “Support local bands and local music. Buy a CD once in a while that you haven’t ever heard of. Be creative, and open minded!”

Catch Decapitado at Bomblastica 2004 March 19th at the Annex in Madison and March 20th at Vnuk’s Lounge in Cudahy (by Mitchell field in Milwaukee). Both shows are no cover and free beer till its gone.