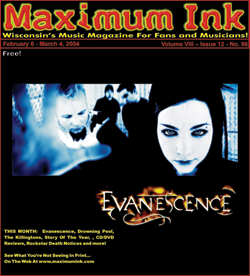 Evanescence on the Cover of Maximum Ink in February 2004

As the constrictive walls between orchestrated classical music and modern metal have been hazily blurring, few have stepped through the sea of fog to challenge the listeners yearning ear. In dictionary terms, Evanescence is the act or state of vanishing away; the disappearance of vapor(s), of a dream, or of earthly plants or hopes. The solid reality, however, is a group concluding their second world tour in support of their quadruple-platinum album “Fallen”.

Frontwoman Amy Lee spoke with Maximum Ink from a bar in Tokyo about the recent lineup change, their worldwide notoriety, and Ludwig Van Beethoven.

“The one rule (I hate rules), is to be as creative as possible,” says Lee, “I want to open the box even more. Instead of feeling pressure because the album did so well, I feel like it gives us the freedom to do whatever we want on the second album. I’m really excited just to be a creator again and write whatever feels good.”

Lee is the only original member of the Little Rock, Arkansas quartet following songwriter/guitarist Ben Moody’s sudden departure on October 24, 2003 during their European tour. The two have reportedly not spoken, and Moody has signed on with multiple Grammy-winner Avril Lavigne. To finish out the tour, second guitarist John LeCompt took over both of the guitar parts, and the band has now named Terry Basalmo of COLD as Moody’s permanent replacement. Wes Borland (formerly of Limp Bizkit) was also considered, and will be contributing to their sophomore release. Overall, Lee is very enthusiastic to be working with Basalmo.

“We all get along very well,” says Lee. “He’s a perfect fit, and he’s an excellent musician and a great writer.”

Lee’s voice shines like a shoreline lighthouse in a winter squall, drawing from a steady influence of Bjork and Tori Amos on “Fallen”. The breakneck crescendo of the group’s popularity has done little to hinder the creative processes. Despite relentless touring, they are anxious to return to the studio to utilize new ideas.

“More than anything, I’m looking forward to working with my own band, that’s the real focal point,” says Lee, “We’ve all been brainstorming, being creative independently and [we’re going to] throw our ideas into a big pot and make the record.  It’s going to be awesome, I’m so excited! I feel like I’ve been through so much in the past year, I’ve got so much to write about. It’s filling out and I can’t wait to get home and regurgitate it into the piano.”

Though the mounting pressure of public eye has become too much for many, Evanescence has been dealing with their fame in stride, seemingly unfazed by the majority of the ordeal.

“I’m very grateful for it, but it’s not something I value highly. I wanted to be able to sell enough records to have the money to make a second record and break even. This whole worldwide success thing wasn’t my plan of world takeover, I just want to make music for a living, and the fact that so many people like it is a great bonus.”

Including the influence of Bjork and Tori Amos, Lee cites many classical composers as having a profound influence on her musical education. When asked about one of her greatest influences, Ludwig Van Beethoven, Lee paused, choosing her words carefully.

“It’s the same thing I love about Beth Gibbons of Portishead, which is the beauty in the restraint. I think what’s cool about Beethoven is that the real painful, beautiful stuff is when he’s holding back the emotion. It’s a tease, I love that beauty.”

Evanescence will be passing through the area on the following dates
( for ticket info go to www.ticketmaster.com )

* Find more on the band bio, tour dates, music, and videos at their official website:  www.evanescence.com

“I know it all could be gone in 5 minutes,” says Lee, “Fame is fickle and so is popularity, and I don’t necessarily want to do it forever anyway.”