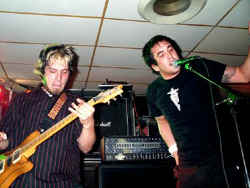 When people tell Scott Rose that his band doesn’t sound enough like something else, he typically just nods and smiles. The topic comes up a lot because Fingertight’s sound tends to vary. At times they’ll be as crunchy and aggressive as any nu-metal band while at others they sound as melodic and contemplative as fellow Californians, Incubus. While some might see this as a fault, it’s always refreshing to find a band willing to take two different areas of metal and explore the soundscape in-between in the way that Fingertight does.

The sound is fresh enough that Fingertight (Scott Rose, Sergio Renoso, Jesse Del Rio, and Kirk Shelton) were offered a record deal by Colombia and have recently joined the Lollapalooza lineup. Rose took the time to speak with Maximum Ink as he and his band mates rode home from LA.

“We’re really fucking stoked. It’s a great opportunity,” says Rose of Fingertight’s spot on the Lollapalooza lineup. Rose, who joined Fingertight after seeing them play a local show and hearing they were looking for a singer, says that he and Fingertight fit like a glove. “We hate each other and love each other, but we know how we’re all fucked up and we let each other have bad days.”

Musical tastes tend to vary among band members and like differences in mood, the four members accommodate one another in tastes, which vary from Death Metal to Jazz.

Fingertight and the rest of Lollapalooza will be in Milwaukee on the July 11th and Chicago on the 12th. Their new album, “In The Name Of Progress”, is in stores now.