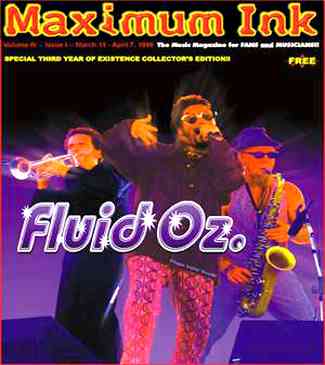 Rockford's Fluid Oz. on the cover of Maximum Ink in March 1999

There is something downright slippery about the Rockford band, Fluid Oz.  Something this sharp shouldn’t bounce so hard. These restless roustabouts dance around the stage like disco maniacs but lay down a heavy groove that smashes the competition.  Their romp, stomp and release shoots past standard labels to combine punk, funk, jazz and jump for a free for all monster mojo that sets fire to the volcano and cooks up a killer beat delivered with an iron fist. Out with a CD that showcases their dual talents for electrifying showmanship and original songwriting, Fluid Oz.‘s Show Boatin’ Muthas is an accurate depiction of their earth shaking, roof rattling, booty shaking live shows. The current eight man line-up reaches deep into the pockets of James Brown, Sly Stone and the Red Hot Chili Peppers, to come up with their own unique brand of sass and pizzazz. Think of the Beastie Boys with a brass section or P-Funk married to Oingo Boingo.

Four years ago guitarist Brent Shelton, drummer Bunj and bassist Jerry Sofran formed the core of what was to become Fluid Oz. The bon vivant bounce of vocalist Jason Williams brought the mixture to a boil while saxophonist Brian Carter and trumpeter Chris Picot gave the band a pocketful of brass knuckles. Finally, the band took on percussionist Sugarbear and rhythm guitarist Mickey Rosenquist, replacing former members Tyler Shelton and Paul Manson, and developing the reputation that had them local favorites on radio stations WIBA and WTVO for the past two years.

A zest for live performance separates Fluid Oz from the rest of the pack and the band has perfected their craft with relentless gigs that carry them from St. Louis to Champaign, from Madison to Bloomington and Chicago. Frontman Jason Williams sees their live shows as the music’s center.  Instead of being a means to an end, Jason likes to believe the shows are the reason the band stays so tight and why they have succeeded so quickly.  Jason likens it to running your own business; believe in the product you produce and whatever results from it, you will, at least, never fail in being true to yourself. Confidence has never sounded so groovy.

Dress up this strong commitment to an outrageous sense of stage fashion, mix it with a pile-driving, pogo-swinging potpourri of panache and you get what guitarist Brent Shelton, who also produced their CD, calls funk with an edge.  This gonzo no holds barred approach marks Show Boatin’ Muthas from start to finish.  From the epileptic resonance of the opening, “Shakey Puddin’,” past the smooth, soul musings of “Silky,” this is a disc soaked in sweat and flushed with good vibrations.

Versatility within a distinct style has the goose-stepping nasty rap of “RC” butting heads with the good time get down of “Saddle Shoes,” resulting in a disc that flows with a strong undertow of catchy rhythms, capturing the free and easy vitality of their road shows.

This carnival of sound and fury is not without its strong threads of sanity.  Talent abounds, and each member poses a multiple threat as horns players and guitarists trade off on keyboards, guitars and tambourines change hands every other number and everyone joins in the background vocals.

Songwriting is a group effort and the massive collaboration gives each tune an eclectic spin that is downright contagious.  Foot stompers change lanes and pull out jazz solos while dance numbers rock out at the drop of a hat.  Change is the only constant and each tune is saturated with strong licks and optimum energy.

The near future looks bright for the band with a full-length studio CD planned for mid-summer along with house style remixes for an upcoming single.  Upcoming shows have them Southern bound with spring break dates in Florida, Mississippi and Georgia, while March 4th finds them playing at Chicago’s prestigious House of Blues.  Toned up and ready for action, these day-glo boogie boys have a treat in store for Madison audiences on March 18th, when they headline Maximum Ink’s Third Annual Existence   Party.  It’s free, it’s fun, and with Fluid Oz at the helm, you can be sure that it’s going to be supremely funky.