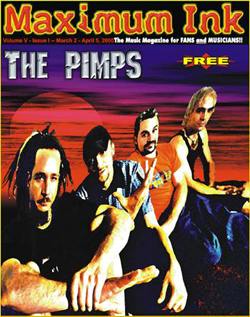 When rock music and Rockford, Illinois are mentioned in the same breath, the only thing that comes to mind is Cheap Trick . Rockford is not known as a musical mecca, but as in any city, there are always at least four or five punk kids who come together, form a band, and create something worthwhile. It is now Rockford’s turn again to offer a group that demands attention on a national level, and this time the entity is called The Pimps. Originally christened The Good Year Pimps , the band was forced to drop half their name because the mighty tire company that has become synonymous with blimps didn’t like the quintet’s little word play. While this was a disappointment to the group, they realized that good rock and roll is about the, not the name. Indeed, the Beatles were once the Silver Beatles, Grand Funk were once music Grand Funk Railroad, and Chicago were once Chicago Transit Authority. On top of the historical justification, “The Pimps” is easier to remember, shorter to type, and has a bit more of a sting to it.

Releasing a CD on their own label, The Pimps managed to sell 5,000 discs out of the back of their small tour bus as they relentlessly played the pubs and clubs of the Midwest. Word of the band began to spread and eventually made it to the ears of Los Angeles record companies. Soon, serious interest began to brew and labels started making contact with the group. Last year, the band signed a million-dollar contract with Hollywood Records - quite a leap for a grassroots working band, but a move that initially was not without trepidation.

Disney-owned Hollywood Records has a lot of money, but have yet to break an act. In fact, the company is the butt of many record industry jokes, and is often viewed by critics as a stillborn attempt by Disney to cash in on rock and roll. The Pimps are undaunted by this, however, and are brimming with confidence that they’ll be the band to give the label success and - more importantly - respect. Such self-assuredness is merited with these guys as they steam ahead in support of their debut album, “To A Cool Person, Stay That Way.” Touring with the controversial rap act, Insane Clown Posse, the band is reaching large audiences across the country. This, coupled with the recent success of other punk-rap bands like Blink 182, Limp Bizkit , and Kid Rock, seems to lay a fertile path upon which The Pimps can stomp the terra firma. With the bankroll of Disney behind them, the sky is the limit.

Describing his band as being influenced by “everything from Tori Amos to Tupac,” singer Stu Johnson points to the songs on the album as proof. The cuts are quite varied, from funky, smooth tracks like “Sumpin” to vicious, guitar-heavy cuts like “Job Opportunities” to comedic bits like “Grandma’s Christmas Shirt,” the directions the band can go in seem limitless. The fact that they insert a sense of humor into their music demonstrates a maturity that many groups are unwilling or unable to do. The band’s willingness to do this also lends honesty to the music often absent in the output of many of their musical peers. Like Cheap Trick, their Rockford forefathers, The Pimps are able to portray themselves as cool without seeming pompous or out of touch with the average kid on the street who is going to buy their album. In this era of prefab rock and megalomaniac sellouts, such an attitude is a breath of fresh air.

So, will The Pimps traverse the proverbial mountain of stardom? Can they fight their way into regular MTV rotation? It’s hard to say because the music industry is hardly a pure science. Unfortunately, it’s not only about who has the talent, who writes the best songs, and who tours the hardest. It also involves record labels, management teams, accounting firms, product placement, genre trends, and plain old dumb luck. If just one of those factions fail, it can bring the whole team down and negate the rise of a potent band. One thing, however, is for sure - The Pimps are about to kick off another set of tour dates this spring, and one of the first places they’ll play will be right in Madison, Wisconsin at BOMBLASTICA 2000: A MUSIC PARTY FOR THE PEOPLE (Maximum Ink’s 4th year of existence party). The gig takes place March 23rd at The Annex at 1206 Regent Street. Bands opening for The Pimps include Angels Or Insects, Rebels Without Applause and Plastic. I have a feeling that the Max Ink partygoers will not only be treated to some high-quality rock and roll, they’ll also go away with an “I-remember-those-guys-when” story that involves the musical second coming of Rockford, Illinois.