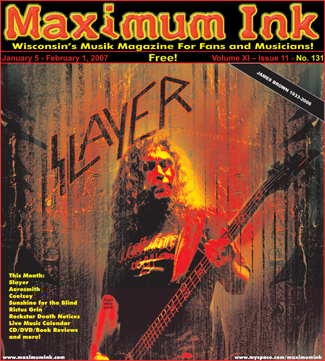 Slayer's Tom Araya on the cover of Maximum Ink in January 2007
photo by Andrew Gargano, design by Peter Westermann

In the past 25 years, Slayer have become more than a band; they have become a right of passage. From the first unholy alliance of frontman/bassist Tom Araya, guitarists Kerry King and Jeff Hanneman and drummer Dave Lombardo in 1981, through the release of their “Show No Mercy” debut two years later, and beyond the onslaught of last year’s “Christ Illusion,” they’ve embodied the very essence of heavy metal’s macabre roots, and become the lightening rod for bands that hope to prey on the genre’s unearthly future. It’s been a quarter-century, but even time can’t temper the band whose history has been set ablaze by such legendary releases as “Hell Awaits,” “South of Heaven” and “God Hates Us All.” Maximum Ink sat down with Araya on the eve of the band’s upcoming North American tour, a tour that promises more than just bringing Satan back…

MAXIMUM INK: Is it fair to say that Slayer have become a lot more political in recent years?
TOM ARAYA: It comes across that way, but it’s not. There are more social commentaries, and more of, “This is what I see, so I’m going to write it.” But we really don’t like to state our views. We just like to write what we see and see what your opinion is, and what you think of what we’re seeing. Maybe you’re seeing something different…

MAX INK: But it’s not unfair to say that your inspirations have changed a lot over the years?
ARAYA: Yeah, you’ve got different things that inspire you. It’s your surroundings, and it’s maturity. You grow up and you start seeing things differently, and you start writing differently. It doesn’t mean your going to change the imagery and the ideas behind Slayer, you’re just going to change the pictures you’re painting. Where before it was demons and devils, now you’re writing songs about humanity’s demons and humanity’s devils.

MAX INK: It’s a testament to Slayer that you’ve been able to make that progression, because a lot of bands that used to be your peers haven’t been able to do that.
ARAYA: It’s just maturity. It’s just coming to grips and understanding the subject matter. When we first got together, Dave, Jeff and Kerry were still in high school! We were going to call ourselves Slayer and be everything that’s not Hollywood: We’re not going be pretty boys, we’re going to be ugly boys, and we’re not going to write about parties, we’re going to write about Satan. You know what I mean? [Laughing] We were young, Kerry liked the whole satanic thing, Venom was a huge influence, and we started working on our own songs and developed it. By the time we did “Show No Mercy,” we had all that—I was 22, they were 19, and we were young kids.

MAX INK: So the evolution started then, and hasn’t stopped.
ARAYA: Yeah. You’re young, but as you grow up you have to evolve and you have to make a change. That’s what we did. We grew, and “Reign in Blood” was the turning point. We had just got through doing “Hell Awaits,” which was a very dark, hell and Satan album, then the subject matter changed on “Reign in Blood.” It was less Satan and more on a social level… But every now and then you make sure you mention “Satan!” [Laughing]

MAX INK: Has being a father tempered you at all?
ARAYA: No. The only thing I do differently is watch my language [laughing], and that’s just around my kids and my family. That’s something that I’ve done subconsciously, but that’s it… Me and my wife are big scary movie fans, like the remakes of “Amityville Horror” and “Texas Chainsaw Massacre,” and we let our sons watch those movies with us. They don’t have to watch it with us, but they’re allowed to… They’re seven and 10, and every now and then one will ask, “Is this real?” We talk to them and make it clear that it’s just a movie, and they understand. Then they watch the specials about how the effects and scenes were done, and they get a better idea that it’s just movie magic. It’s the same with music, we let them listen to whatever they want to.

MAX INK: Being on the road for as much as you guys are, does it sometimes feel like you’re living in a bubble?
ARAYA: You do an album and you go on the road, and that’s two years. Unless you sit down and make yourself pay attention to what’s going on… In two years a television series can come and be gone, a band will have a hit and be gone, then you get home and hear about. I remember coming home once and hearing about Kid Rock, and I was like, “Who the fuck is he?” That happens all the time: You come back and people are huge, but you’ve never heard of them before. I’m assuming that there are a lot of musicians, like me, that don’t watch MTV, and don’t see who’s on top of the world at the moment, they just see who’s survived and who people are talking about so often that they become a fixture.

MAX INK: So you end up hearing about Justin Timberlake, but not necessarily some of the up-and-coming bands in your genre.
ARAYA: Yeah… Like that [Timberlake] song “Sexyback.” I get exposed to those songs through my kids and through my wife. When I heard that song I thought it wasn’t really that bad a song, then I saw the video and listened to the words and realized that he’s poking fun at all the other guys that haven’t done shit, so now he’s got to bring sexy back because nobody else can do it! [Laughing] The song is good, even if he didn’t have anything to do with writing it, and there are a lot of one-off songs like that… Like the 50 Cent song “Just a Lil Bit,” I like the music and thought the Middle Eastern vibe was clever. There’s that “Gold Digger” song [Kanye West], I think that’s fucking great! I go out on the road, come back, and that’s what my wife and kids are listening to. It may not be my taste, but I can still enjoy it.

MAX INK: So, you’re going to bring the sexy back to Satan?
ARAYA: [Laughing] Yeah, we’re bringing Satan back! [Laughing]

MAX INK: [Laughing] Before we scare the Slayer fans with too much “sexy” talk, what can people expect from the upcoming tour?
ARAYA: We’ve got what we call the A markets, the B markets, and then the C markets, and this tour is a lot of the B markets, a lot of the more intimate places that hold 2-3,000 people. To me, experiencing one of those shows, the smaller the better, those are the shows people need to experience, because it’s more intense. I use the word “intimate,” because I can see every person all the way to the back, I can make eye contact, and they can see what we’re doing and really feel the music in tight quarters.

MAX INK: Will the set be heavy on “Christ Illusion”?
ARAYA: Yeah, we’re going to try and go heavy on the new album. Right now we’re doing four songs off the album, in fact, there are songs that haven’t been introduced to the States yet. We’ve been doing “Cult” and “Eyes of the Insane,” and in Europe we did “Supremist” and “Jihad.” We’ll definitely try and bring in some songs that we haven’t done in a while, and may even try and attempt to do some that we’ve never done… But I use the word attempt loosely, because we might not! [Laughing] No guarantees!