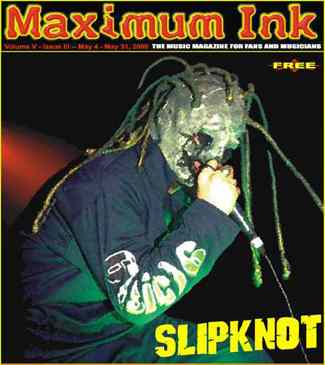 Ten years ago, the Limelight was a landmark for bands who performed in New York City. Women danced in cages suspended from vaulted ceilings, stained glass surrounded a stage elevated on what used to be an altar, and men and women mingled in lines for unisex bathrooms. Built as a church decades earlier, the site had since been deconsecrated, converted to a nightclub, and angel-shaped disco balls hung where a crucifix was once suspended. It was the perfect not to mention haunting and eerie setting for the inspired debauchery of sex, drugs and rock ‘n’ roll that made the late ‘80s and early ‘90s such revered times.

And almost a decade later, recently reopened, it was the perfect venue to host the live chaos that is Slipknot.

Had there still been cages, more timid members of the crowd may have fled for them, seeking sanctity from the madness that overwhelmed the mosh pit, a floor previously occupied by rows of pews. In stark contrast to the gothic styling of the stained glass that overlooked them, Slipknot’s red jumpsuits were bright and glaring, punching into the flashing strobes and lights that lit the stage and sold-out crowd. It was a venue far too small for Slipknot who had made their network television debut only hours earlier on Late Night With Conan O’Brien but what it lacked in size, it made up for in character, with fans hanging out of choir lofts that overlooked the insanity.

“I think it’s a three-step process,” says frontman Corey#8 in Slip-speak, which has each of the band’s nine members represented by a numeric digit 0-8of his band’s exploding popularity. “The first step is either seeing a picture of the band or seeing the album, and we have nine twisted looking individuals in red coveralls, bar codes, masks… People go, ‘Holy shit, what the fuck is this?’ and they take a chance, they buy the album. Then they put the disc on and the music is step two. We don’t pull any fucking punches, we don’t back off, we just really fucking go for it. Then we roll through town and people get to come to a fucking show. That’s when you see step one and step two together, us on stage beating ourselves senseless and jamming out really good fucking music. Whether I’m pissing off of Joey’s [#1] drum riser, Clown’s [percussionist, #6/Shawn] throwing human shit around the stage, or people are setting themselves on fire, the music is still there. The music doesn’t lack for it, and the music has always been number one.”

Whether you liken their live show to a prison riot set to a heavy metal soundtrack, or see it as little more than the latest maniacal brainstorm of music industry marketing, you can’t deny the chaos that ensues when the Des Moines, Iowa nine-piece assault a stage. And yet, despite their outlandish guise, the music does work for Slipknot, who could just as easily deliver the goods if they were to take the stage in khakis and sweater vests.

Opening track “(Sic)” is a throbbing world of hurt that offers a fitting introduction to the world of metallic mayhem that awaits, Corey barking, “You can’t kill me cuz I’m already inside you,” just as the band’s infectious rage needles its way under the skin. “Eyeless” offers the enigmatic rant, “You can’t see California without Marlon Brando’s eyes,” while lead single “Wait and Bleed” is a song long overdue to the metal genre, melding the poetic ease of melodic choruses with death metal-ready verses that snap the neck like a twig. “Surfacing” is savage, a sound-effect laden blast that utilizes the full effect of the bands drummer, two percussionists [Shawn & #3/Chris], a sampler [#5/Craig] and a turntable wizard [#0/Sid] By the time you add the two guitarists [#7/Mick, #4/James] and bassist [#2/Paul] to the mix, Corey is charging forward atop a rush of adrenaline that rivals Hiroshima in deadly force.

It’s brutal. It’s maddening. And the masks give the carnage it’s matte finish. The last thing Slipknot will ever be considered are a glossy commercial product to be fine-tuned until the money stops coming.

“If you can’t feel exactly what the fuck you’re doing, why are you doing it? If you can’t mean everything you fuckin’ say whether it’s a chord or the fucking chorus what’s the fucking point?” asks the frontman. “Everybody’s multi-faceted, everybody has different pieces of originality. You may be a different way with 10 different people, but you’re still the same person. When we’re on stage, what you see is the music that’s inside of us, we put the masks on and become the people who wrote the music. Everything is amplified and that’s the face of the music, it helps us draw all that shit together and go crazy. It’s ritualistic.”