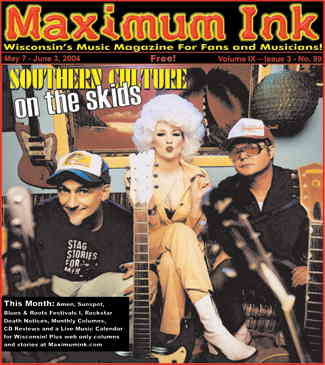 Southern Culture On The Skids

From white trash and trailer homes to the toe sucking geek rockers touring the world and eating delicacies. Where did it all begin? Who came up with such a concept? “Me,” states Southern Culture on the Skids (SCOTS) founder, guitarist and singer Rick Miller in a recent phone interview. “When we started the band in the early to mid 80s in the Chapel Hill, NC area, every band was an REM cover band, and that pretty much sucked. We wanted to be more of a rockabilly, “Cramps” type band. So we were just looking for something. Some kind of name that would get us some attention, ya know? We were listening to the UNC radio (station) there and they were playing an REM song. I like REM fine, but at the end of it, the DJ says, “Ya that was REM, the sound of the new South.” I looked at my roommate and we said, “Gawd, if that’s the sound of the “new South,” I preferred it when it was on the skids.” That’s how we got the name.”

SCOTS’ new release is called “Mojo Box.” It was produced by Miller and recorded in his Kudzu Ranch recording studio. SCOTS lineup consists of Miller along with bass player and singer Mary Huff and percussionist Dave Hartman. What’s new on “Mojo Box?” Miller says “I think there are a few more surf sounds. Less of the white trash shtick. I think on this album we worked harder on our harmony vocals and that kinda countrified delivery. I think it’s kind of a transitional record for us. Our other records are a lot of concept type stuff. Like “Dirt Track Date,” and “Plastic Seat Sweat.”I know that sounds kinda funny for something that probably a lot of people consider kinda low-brow.

So what’s on the horizon for SCOTS? Rick illuminates us. “Right before this record we released a box set of singles, 45’s, which were all cover tunes of songs that influenced us. I think we’re gonna continue that and put out a full length of other cover tunes we like. Before we get done touring “Mojo Box” we want to do another full length live record. Other than that we’re just touring a lot. We’re gonna go to Europe this summer for a little while, maybe Spain. Another tour of the Northeast and Canada in June. So we’re staying really, really busy.”

SCOTS has toured the world several times. What are their favorite places to play? “As far as countries,” explained Miller, “I really like Spain and Australia. They are probably my favorite overseas. It seems that the people like to party. They are a little more relaxed and they have a sense of humor. Germany and northern Europe can be ok, but it tends to be a little cold and depressing. The Australians and Spaniards they seem to enjoy a good drink. That doesn’t mean they are a bunch of drunks, just means they’re fun. They enjoy rock n roll. At least the clubs we play. A lot of it has to do with where we play, and the promoters we have. We have very excellent promoters in both of those countries.But in the States there are a lot of fun places. We always have great shows in western Carolina and eastern Tennessee up in the mountains. Ironically I really like playing Santa Cruz, CA. The surf thing comes off really fun because of the beach.”

The official SCOTS website is www.scots.com. One of the more unique sections on that site is the recipe section. There are several winners like “Baked Skunk” and “Possum and Chestnuts.” I asked Rick what his favorites were. “My favorite recipe that should be on there is the Chicken with a crust of crushed Cheez its and potato chips. That I actually have tasted and it’s delicious! You guys need to submit some recipes! I know you folks out there in Wisconsin won’t let me down. We had your famous beer cheese soup with the popcorn croutons. We got that somewhere up by Eau Claire. The sign by the place said something about chicken, so we got a basket of that, and while we were waiting someone said, ‘While you are waiting for that chicken, you should try some of our world famous beer cheese soup.’ I thought well, if there are two things Wisconsin is known for, it is beer and cheese. How can we go wrong? In the end it was, A little thick. I don’t think they left it in the microwave long enough.”

SCOTS are playing thru this area shortly. See them 5/16 at First Avenue in Minneapolis, MN, 5/18 at Stone’s Throw in Eau Claire, WI or 5/19 at High Noon Saloon in Madison, WI.