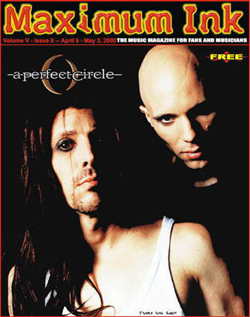 When Billy Howerdel was writing the songs that would later become A Perfect Circle’s debut, he had a very specific vision. It involved a female singer, lending her soft caress to songs that would be ambient, ethereal, and heavy. “I wanted to do soundtracks,” recalls the guitarist, “I literally wanted to do a song, a 40 minute song that can be a score to a movie.” And he adjusted more than a decade of songwriting accordingly, padding out songs and stretching them from four-minute pop, to textured voyages ten times their original length.

Then, while doing production work during the recording of Tool’s Aenima epic, Howerdel met the band’s frontman, Maynard James Keenan. Keenan liked what he heard of the guitarist’s works in progress, and asked if he could contribute vocals. “I was thrilled,” Howerdel laughs, sitting in a Los Angeles rehearsal studio where A Perfect Circle were preparing for their current tour with Nine Inch Nails. “I quickly got over the female voice thing! From there, things changed.”

Most specifically, the 40-minute embellishments were trimmed to a more svelte pop-format, with Keenan writing and recording lyrics for the 12 tracks that are now Mer de Noms [French for Sea Of Names].

Comparisons to Tool will come quickly and justifiably so, says the guitarist, as the band is a favorite of his, but the differences will also shine through with brilliant detail. If you were to liken Tool to a complex mathematical equation, you’d need a vast knowledge of finite and infinite numbers, positive and negative realms, and statistical ratios of dizzying proportions to fully comprehend their art. A Perfect Circle, on the other hand, deals in solely finite numbers. The equations are still complex, and at times staggering, but they’re not beyond the realm of most listeners.

Musically, A Perfect Circle are as skilled a unit as any band could wish for: In addition to Keenan and Howerdel (a former tech with a resume boasting the likes of The Smashing Pumpkins, David Bowie, Nine Inch Nails and Tool), the band is rounded out by former Failure guitarist Troy Van Leeuwen, drummer Josh Freese (Guns ‘N’ Roses, Paul Westerberg, Vandals and Devo) and bassist Paz Lenchantin , whose classical training also includes piano, violin, guitar and vocals.

According to Keenan who sports long hair in A Perfect Circle, a change from his shaven, painted ways in Tool the band’s name is symbolic of, the five members’ chemistry. “We went around and around trying to come up with a name for the band and nobody was happy with what everyone else was coming up with,” the frontman says of the name. “Then Billy and Paz were listening to one of the basic demos and heard the line, ‘A Perfect Circle.’ In hindsight, it definitely makes sense. Here we are, five musicians doing what we do with other people and everything, and in an ideal situation when you come together with someone musically it’s nice to have it work out. That’s what you prepare for your whole life as a musician. You hope to end up with these people who are listening the same way you are, or are picking up the pieces you aren’t picking up to complete the picture. I think that’s what we have here.”

It’s worth stressing that A Perfect Circle isn’t just a one-off project for the band, who have been signed to a multi-album deal with Virgin Records. With a new Tool album not expected until at least early 2001, Keenan will have plenty of time to support A Perfect Circle on the road while still fulfilling his obligations to Tool.

“It’s just different, a different piece to who I am and what I’m working through,” he says, noting that both bands are of equal priority to him. “This is definitely a much more vulnerable project. I think that’s probably why it resonated so true for me, I was probably in that space where I was ready to open up a little more than I had in the past. Hearing what Billy had worked on just pushed me over that edge to go to the next step. It’s definitely a new phase.”