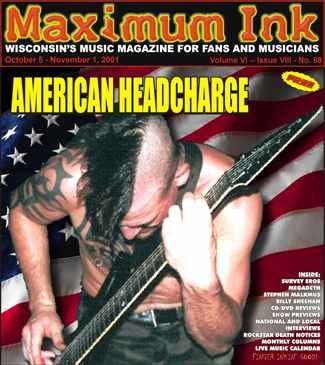 When the name of your band is American Headcharge , and your album cover for debut release The War Of Art depicts a black-eyed Uncle Sam pointing a gun at the listener, you’ve got to excuse people for assuming you might have a political slant. But according to bassist/guitarist/all-around-American Headcharge -musical force Chad Hanks, that’s just the problem.

“There’s absolutely no tie in at all,” Hanks says of his band and politics. A logical question though, especially in light of the recent terrorist attacks on America, and Headcharge’s ironically appropriate Uncle Sam imagery. “That imagery is the funniest part of the whole thing. It’s like Andy Kaufman shit! It has nothing to do with anything, it was just great imagery, especially considering that we’ve got American in our name.

“Actually, we are extremely anti-message oriented,” he continues. “We take extreme pride in the fact that we’re not trying to tell people anything. We’re not pushing any message or any cause down people’s throats. Politically, I guess we’d be like the anti-Rage Against The Machine in the bizarro world… It’s just a case of people assuming. They do that all day long, walking around in an assumptive daze a lot of times. If they knew that we just didn’t give a shit, it would probably surprise a lot of them. Maybe if they’d read into it they’d go, ‘Geez, that was the last thing I expected, maybe I should reconfigure my thought processes completely…’ Not that that’s going to happen, but you know what I’m saying.”

That said, firing guns off onstage and burning an American flag as a part of this summer’s OZZfest didn’t help their anti-political cause, but again, Hanks is insistent. “Shit, it’s all very personal. There’s nothing political on the record at all, not one iota. There are no causes being rallied for… It’s all just real introspective dirty laundry airing.” 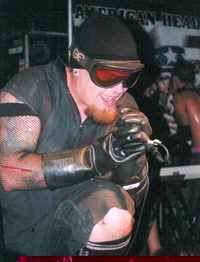 OZZfest proved quite the launching pad for the seven-piece American Headcharge, who catapulted from the tour’s sidestage to an opening slot on Slipknot and System Of A Down’s Pledge Of Allegience tour. Now they’ve got their fingers crossed for a spot on the Ozzy Osbourne and Rob Zombie -fronted Come All Ye Faithful winter tour.

“Basically, we were selling vacuums door-to-door. It was like cold-calling when you’re a telemarketer. Opening OZZfest , you go into this huge group of people at 11 in the morning, and 90% of these people probably haven’t heard of you, 95% haven’t heard your music, and they’re standing their like, ‘Okay, impress me mother fucker.’ So you’ve just got to go out there and do what we did.”

What American Headcharge did involved a ballistic barrage of heavy metal thunder that couples lacerating chords with industrial depth charges, making them one of the most impressive up-and-coming acts of the summer circuit. Influences run the gamut from the brilliant and quirky stylings of Mike Patton, Frank Zappa and Tom Waits, to the more electronically-minded backbeats of Skinny Puppy, Meat Beat Manifesto and Ministry. There’s the sonic boom of Public Enemy, and the sinister slam of Slayer .

“It would be nice to believe that we’re making some brand new, grand musical statement, but we’re really not reinventing the wheel,” admits Hanks, though he’s quick to add that he does think American Headcharge are poised to make a statement on the modern metal scene.

“Once you put all our parts together, the whole we make is a lot different than a lot of the bland music going on right now. I think we hit at the right time. People are sick of cookie-cutter rock right now, and there’s just too much of that.”