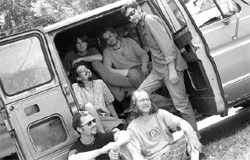 Political revolution through music and a spelling error are just some of the inspiration behind Baghdad Scuba Review.

“Having no direction or goal we performed under such names as ‘John Schneider and Friends’ or ‘The John Schneider Project’,” Riedasch said.

The members of Baghdad Scuba Review all came from well-known Madison bands. Riedasch and percussionist Rob Bloch came from the band Groovulous Glove, Thompson from Green Situation, Gerstner from The Northern Pines Band and keyboardist Jason Krueger from Runga Kutta. “Since then, we all started taking ourselves a little more seriously, originating with the birth name of BSR, but we’ve never let it go to our heads,” Riedasch said. “I think we all agree that isn’t the objective of this band.  We’ve always had this underlining respect and closeness with each other which is simply not describable.”

The inspiration behind the band’s unique name is of a political persuasion, Riedasch said. “Mainly current events, i.e. Iraq War, and our continuous pepped up frustration with George W. Bush.  We all had and continue to have spot-on views as far as politics and the horrific events that were and are happening,” he said about the band’s inspiration. “This is also what we feel will go on for years to come. So I think our unspeakable thought was, ‘What the hell, what do we have to lose?  Let’s start our own fucking revolution through music’.”

Riedasch said he and the band were striving for a name that did not have a meaning and that was designed to make people think. “We wanted something that intentionally didn’t make sense since our government doesn’t make sense.  When you think about it, our government has no meaning anymore, since it was originally created for the power of the people in mind and this obviously is no longer the case today,” he said. “It all began when Rob blurted out ‘Baghdad Scuba Team.’ Then John contributed by adding ‘Revue.’ It was misspelled on the first flyer.  Since then, with the realization of the harm that may come through publicity and our fan-base, it just stuck.”

“Many of our songs lyric content and messages are based on current events and a dislike of the current political administration,” he said. “We are trying to get people to think, question, understand and even speak out against current issues and pending crises of our country and the world as a whole. I guess we’re attempting to do this in a way that isn’t exactly popular right now, through politics.  We know there is a great deal of people and/or fans that are out there that agree with us. We’re not only agreeing with them but we’re trying to wake up those who are not even aware.”

Baghdad Scuba Review continues to perform regularly at Mr. Roberts, where Riedasch helped start live music and still does most of the booking. “It was natural that BSR would play there regularly,” he said.
He added that a typical evening at Mr. Roberts while Baghdad Scuba Review is performing is two or three sets of a mix between originals and covers. He said by the middle of the night their diverse fan base does not want them to stop.

“It’s been difficult in the past to even get the people to leave, which isn’t necessarily a bad thing unless it is past bar time,” he said.

July 5 will mark the second year that Baghdad Scuba Review has performed at Summerfest in Milwaukee. Riedasch said the first year they performed was one of their best performances to date. He said the adrenaline rush may have had a lot to do with it. “I just remember the gates opening and a huge group of people literally screaming as they ran toward our stage. That’s a feeling we will never forget.  Even though we played at noon, the first timeslot of the day, we had a lot of people cheering us on and played a very solid set,” he said. “We were told by those who attended that we were by far the best performers that day.  That’s very rewarding coming from people you don’t even know.”

July also marks the second time the band will perform at Atwood Summerfest in Madison. “We are looking forward to being a part of it again,” he said. “We’ve also had a great response at this event, and it was also a memorable time.” Baghdad Scuba Review will be performing at the Maximum Ink/Berghoff Rock Stage July 28 during Atwood Summerfest.