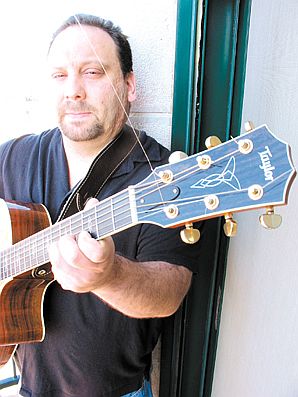 Jerusalem Post, by Gavriel Fiske: If you live in the capital you’ve probably seen the signs offering a free guitar lesson alongside the huge logo of a fish with guitar strings instead of scales. Pretty weird, right?

It turns out that recently arrived master guitar teacher Bradley Fish is advertising his services, which also include music production in his Nahlaot studio. Back in Madison, Wisconsin he had a long waiting list of clients, and he aims to duplicate that success in Jerusalem.

“The free lessons are a way to find people who want to learn and are fun to work with, who have the right vibes,” he explains. After the first lesson, if students want to continue they pay a set fee.

Fish is one of those independent-minded artists who has carved out a niche for himself in the digital age. Besides his guitar skills, he has an impressive collection of what he calls “weird ethnic” instruments. With these he has produced two well-received CDs of loops and samples for Sony Music, and just completed his third.

He also often gets hired for recording sessions, but with a twist: he’ll record his part in his own studio and then send the results electronically to the client. Most recently, he is working on a dancehall reggae album with France’s Big Up Records (Editor’s correction: NYC’s Walkup Records’ artist Bigga Haitian).

“They needed to come to Israel to find someone who could play reggae on a Chinese zither,” he jokes.

He even offers, through his website www.bradleyfish.com, long-distance guitar lessons via a free, US-based 800 number.

With a BA in guitar from Northern Illinois University and more than 20 years experience teaching, performing and recording around the Midwest, Fish came to Israel a year and a half ago, although he is coy about the reasons.

“I was running from the police,” he laughs. “Just kidding.” After spending a year in Tel Aviv, where he “broke his teeth” on Hebrew and was hired to record with artists like Rami Kleinstein and Yehuda Poliker, he decided to move to Jerusalem six months ago.

“I was interested in learning more about Judaism, and I like the weather here. The people are great, and it’s nice to use English. I feel like I’m back in Madison. I used to have all these students from New York - Jewish kids who were into Phish and Dave Mathews, and here I find the same thing!”

For his show on Monday at Mike’s Place he plans to present his own songs in a stripped-down format: one voice, one guitar. His original music is a compelling mix of acoustic rock, soul and world beat, and he can sing too.

Like many musicians who make their living teaching and recording, his own material comes from the heart, without aiming at the pop market.

“I am lucky to be able to translate my way of making a living to this country,” Fish says. “It’s great to pursue a dream in Israel.”