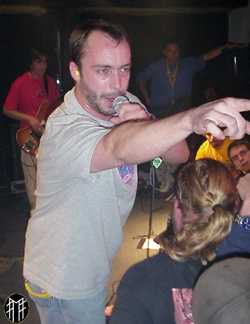 “I suppose anything, whether you like it or not, is an influence,” begins Clutch front man and vocalist Neil Fallon when queried about where the band’s inspiration comes from. “We try to be wide open to many different types of music. I think we find non-rock music the most interesting. After all, one can only do so much with drums, bass, guitar, and vocals. Most music in the world doesn’t use that setup and for us, those are the most interesting musics.  But of course, Led Zeppelin never fails.”

So why choose to do a live album now? Fallon fills me in. “We put out the album now because we had recorded several shows while on tour with System of a Down. We did not begin the recording with the intention that the tapes would be used for a live record. But when all was said and done we decided to release the tapes. Folks have been trading live shows for quite some time, but that community is only so big. Furthermore, we knew it would be some time before a studio album would be ready for release.” How does the band feel about the new album? “Of course there are always things one wants to change, but all in all, we are happy with it,” states Fallon.

Clutch is on tour with the TOSSERS (an Irish rock band)? I had to wonder how that happened. Fallen enlightens me, “Our manager, Jack Flanagan knows the Tossers and thought it would make for a cool bill.” And a cool bill it is. You should see it. 8/21 at the Bottom Lounge in Chicago, or 8/22 at Club Raven in Edgerton, WI. “Throat” is also on the bill.