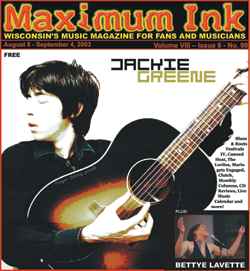 Jackie Green on the cover of Maximum Ink in August 2003

Jackie Greene has often been called an overnight sensation, but his overnight success took six years. “I don’t want to say that I’ve paid my dues, but I kind of have,” said Greene.  “I’ve played since I was 16 in stupid little clubs, just myself, and got paid shit to do it. I had to go outside on breaks because I wasn’t 21.”

Now 22, Jackie started playing piano when he was very young, took a few lessons, but eventually quit and taught himself. Then, after a Metallica-Guns and Roses-Nirvana preteen stage, he started listening to the Rolling Stones, Led Zeppelin and The Beatles .  Working his way backwards, he went through his parent’s record collection and discovered Ray Charles, Muddy Waters and Mississippi John Hurt. His life changed completely. He dove into American roots music and never looked back. Inspired by Tom Waits and Bob Dylan, Greene decided to start writing his own material.

“I think Buddy Guy was the first guy that I ever saw [in concert],” said Greene.  “I was in high school. Jonny Lang opened for Buddy Guy and now we’re opening for Jonny Lang.”

Often mistakenly referred to as a blues artist, Greene is more of a modern American artist. “I’m not really a blues artist,” says Greene.  “If you take my entire catalog there are probably two or three tunes that can be considered blues.  It’s definitely bluesy, but it’s kind of hard to say.”

Like Jonny Lang and Kenny Wayne Shepherd before him, Greene is getting a lot of press these days, most of it adoring. “It’s good, I mean I signed up for this,” said Greene.  “It’s nice and I appreciate it, but I try not to think about it too much.”

With two CD’s under his belt [2002’s Gone Wanderin’ and 2003’s Rusty Nails], national tours and 30 new songs, Greene is a charming and unassuming guy.  “I didn’t even own a copy of Gone Wanderin’ until a few months ago,” said Greene. Jackie Greene plays the Madison Blues Festival later this month.