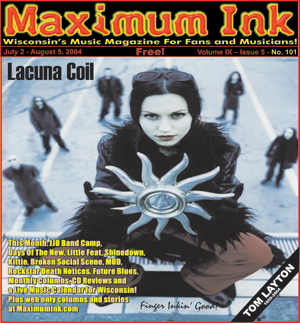 I picked up on Lacuna Coil with their first self titled Century Media EP release. It introduced the sound that would be the guiding light of their musical career thus far. Lush, soothing gothic metal, with interesting riffs, keyboards and amazing vocal harmonies. In fact, an interesting point about Lacuna Coil is that they have two dedicated vocalists, Andrea Ferro and Cristina Scabbia. Their vocal harmonies and interplay are what set the band apart from the pack. Andrea occasionally sings in a lower, gruff - yet powerful - style in addition to his clean complimentary harmonies. Cristina leads, prods, fluffs and adds dimension to each song and vocal extremity.

Back in 1997 when these talented Italians made their debut, few folks in the US were listening to this style of music. Most people were still caught up in the repulsive remnants of the ultra trendy and overdone “Seattle Sound” or feeding the pop punk explosion. The US market simply wasn’t ready. Various other bands came onto the international scene. Nightwish, My Dying Bride, The Gathering, Therion, Tristania, and Theatre of Tragedy were becoming recognized names in the growing gothic metal realm. Lacuna Coil was right there with them.

Then came 1999’s “In a Reverie,” which solidified their place as an up an coming force to be watching for in the future. The “HALFlife” EP came out in 2000 continuing and improving their style and also showed off the addition of a second guitarist. The current line-up was then complete with Cristiano ‘CriZ’ Mozzati (drums), Cristiano Migliore (guitar), Marco Coti Zelati (bass), and MAUS (guitar). “Unleased Memories,” in 2001 showed considerable maturing as a band.

To date “Comalies,” (2002) is the culmination of Lacuna Coil’s hard work. It features an even more accessible style, prompting their recent turn towards the eyes of the media. After touring the world several times, they have the potential to catapult themselves to a whole new level of sales and audience after this summer.

Maximum Ink: What’s the name about (from your perspective)?
Lacuna Coil: We all wanted to change the old name (Ethereal) to a more original and unique name. Lacuna Coil is a good mixture between an Italian word , acuna - which means something like emptyness, and coil - the meaning is still abstract.

MI: How would you describe your music to someone who has never heard it?
LC: A mixture between gothic, rock, metal with a modern touch. A perfect balance between melancholy and power.

MI: Are you looking forward to being a part of Ozzfest?
LC: Of course we are totally excited. We’ll be the first Italian band ever and one of the few who represent the European style. We’ll surely have fun.

MI: Do you get compared to Evanescence a lot? If so, does that bother you?
LC: I think that we’ve been compared basically because they have a female vocalist too, which IS not so common, especially in the U.S. We’ve been doing music together even before ‘96, in Europe when a girl in the band is not something so weird. Anyway we belong to different worlds; we are more underground and heavier.

MI: How is the music scene in Milano, Italy? Are there a lot of bands similar to you there?
LC: Not at all, that’s why we probably did it. When we started, the big trend was power metal and now that is almost gone. We were different and somebody noticed us because of that.

MI: What should we expect when we see you perform live?
LC: A lot of energy, pure energy. We are really compact on stage and we like to express our feelings.

MI: Does your song writing process differ any because you have two distinct vocalists?
LC: With two vocalists we can work on the whole spectrum of notes; hat’s why we can work in a democratic way as two instruments without taking care about who’s singing more. We work for the song only, and together, even if in some cases we work separately.

MI: Anything else you would like to tell Maximum Ink readers?
LC: Thanks to all the people who’ve supported us through the years, keep in touch with www.lacunacoil.it and see you on the road!