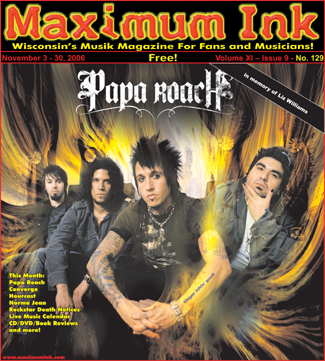 Papa Roach on the cover of Maximum Ink November 2006

At face value, “The Paramour Sessions” may appear to be little more than the collective of songs that comprise the latest release from nu-metal survivors Papa Roach. But below the surface, the album beats with a pulse as vibrant as the band that spawned it, and as haunting as the houses that made the recordings holy. One of the most storied estates in the Hollywood Hills, The Paramour lent a sense of historic awe and paranormal fascination to an already tumultuous period in Papa Roach’s decade-plus history. Long before the site played studio host to artists as varied as Gwen Stefani and H.I.M., it was the 1920’s home of silent movie star Antonio Moreno and wife Daisy Canfield. But when the oil heiress died in a tragic accident in 1933, it cast the property into a state or perpetual disarray, seeing time as both a convent and a school for girls before being devastated by an earthquake in 1987. As Papa Roach frontman Jacoby Shaddix shares in the following interview, sometimes it takes one era’s tragedy to help unleash another era’s triumph. “Last Resort” may have tagged Papa Roach the poster boys of the nu-metal movement, but “The Paramour Sessions” cements their status as rock and roll survivors. From here on out, it’s history in the making…

MAXIMUM INK: You started gravitating towards more of a rock sound on your last album, and this record continues that evolution.
JACOBY SHADDIX: Yeah, most definitely. When we wrote “Getting Away with Murder” we were trying to find who we were as a band. There was a level of confidence there, but after playing it live, touring, getting a solid fan base and getting our success back—not on the strength of hype, but on good songs and a good show—we went back into the studio and writing the record with a new sense of confidence. That was one of the key elements in writing this record, because we weren’t scared of doing anything. We always wanted to live in a house together, because we’re all Red Hot Chili Peppers fans, and watching “Funky Monks,” the making of “Blood Sugar Sex Magik,” when I was like 16-17, I was like, “That’s a rock ‘n’ roll dream to be lived.”

MAX INK: What were your expectations heading into The Paramour?
SHADDIX: We went into that house knowing that we were going in to live a dream. It was kind of a rediscovery of who we are as a band, who we are as people, who we are as musicians… We wanted to write a real hard-edged, straight-ahead, four-to-the-floor, savage rock ‘n’ roll record. Then, when we started to jam, we had jam sessions that would last like seven, eight hours, and we tapped into something besides what we expected to come out of us. We wrote songs like “Forever,” “What Do You Do,” “Reckless,” songs that are so far removed from anything we’ve ever done as a band. Stuff that’s got a big rock feel to it. There were moments where we were like, “Fuck, dude, what are our fans going to think of this,” but then the reality hit and we realized that we were doing something that feels right, and we couldn’t not explore that side of our band because we feel we’re going to disappoint somebody. We owe it to ourselves to explore, and that’s the freedom of music. That’s why I’m in this band. The way I look at it, the artists and the musicians that I look up to the most are the artists and the musicians that take the greatest risks to evolve, like Red Hot Chili Peppers when they released “Under the Bridge.”

MAX INK: Did the house offer inspiration?
SHADDIX: For us, this house had a spirit about it, there was something that was bigger than us. We have never jammed like we jammed when we got into this house. In the years and years that we’ve been playing together, we never stepped into a room and played for six-seven hours straight, just being creative. There were times I was just lyrically stuck, and I’d go down to Daisy’s grave—the lady buried on the property there—and just write whatever comes to me. I wrote a song called “Forever” down there, and also “My Heart is a Fist.” When I’d get stuck, I’d walk around the property and go find the lyrics… We all went into the depths of our own fears and our own selves and ran from our fears, and faced our fears.

MAX INK: How was that?
SHADDIX: We were in a pretty volatile state when we made this record, because a lot of us were going through a lot of personal shit. It all came out on this record. I’d say that this is the most personal band record, as a whole—There’s love on this album, there’s sexuality on this album, there’s fucking violence on this record, there’s sex, drugs and rock and roll, there’s fear, there’s fuckin’ strength. Every experience that we could experience as a group of people, we experienced in that house. We cried. We fought. There were sleepless nights. We kind of got scared of who we were for a little while in that house, and coming out on the other side of making the record, I think getting lost in ourselves was the best thing that we could have done.

MAX INK: How has your approach to writing changed? Your sound has evolved, what brought that about?
SHADDIX: First and foremost, I want to write songs, lyrically and melodically, that you could sing along with. Going in with that intention and being able to execute that on this record was really fucking cool. We weren’t just writing heavy shit for the sake of having heavy shit, but it was heavy shit because we wanted to write it. And good stuff, that you can sing along with, but with also a pop sensibility. We look at ourselves as the band that tries to walk that line between metal, hardcore, punk rock and pop music, you know what I’m saying? We do our best at trying to make it tasteful.

MAX INK: How has fatherhood affected your approach to the band?
SHADDIX: My oldest is four, and my youngest turned two the day after the record came out. Those are my little sidekicks! Being a father is my rock. Being a father has taught me unconditional love, and that’s extended to how I feel about the people in my band. I love them like they were my kids, in a way, you know what I’m saying? It doesn’t matter what you do, I’m always going to love you. P-Roach, we put each other through the fucking ringer. Go ahead and go off the deep end, and I’ll still be here for you. And that’s exactly what’s happened lately. We have to look out for each other, and to that end, being a father has taught me a lot about being compassionate and understanding of people.

MAX INK: You’re opening for Guns N’ Roses now. How’s that going?
SHADDIX: It’s going cool, man. We just jumped on and have done three shows so far—It’s been a while since we’ve been on an arena stage, so it took like two shows to really become comfortable on that stage again. The first two shows were good, but the third show was magic, we fucking ripped it up, the crowd was great, and the response was awesome… In the beginning we didn’t know how we’d approach it, because we’d been in theaters for a while, but once we got the rhythm going, we slayed.

MAX INK: The last time you toured arenas was co-headlining with Eminem, right?
SHADDIX: Yeah, it was Anger Management. We’ve done arenas in between, one-offs and radio shows, stuff like that, but for a proper run, this is the first one in a long time. To get back in that environment, it’s like the carrot in front of the rabbit—I want to get here again!

MAX INK: Will that change your approach to your upcoming theater tour?
SHADDIX: When we did our headlining run through Europe, we just had a killer set put together and it was a little bit different, because everyone’s chanting “Papa Roach” and everyone’s going off on every song and every vibe. To go from that to being an opening band again, it was like, “Okay, how do we adjust to being an opening band again?” So when we go back to headlining, I think we’re going to just go back to business as usual, because we ripped through Europe and had great shows.

MAX INK: Will it be a let down going back to theaters?
SHADDIX: Not at all, because the theaters are where we’re the main attraction. Going out and winning over crowds is fun, but headlining is where it’s at. Don’t get me wrong, I’d love to be headlining arenas, but that’s just not the case right now. That’s the building process that we have to go through to get there. We’re just happy to be out on the road promoting this shit, because that’s what it takes for us to sell records and get in front of the fans and rock them one-by-one.

MAX INK: You were supposed to tour with H.I.M., but they canceled the tour at the eleventh hour. What happened there?
SHADDIX: They won’t tell us… We got the news just as we were getting on the plane to go to Europe, and we were like, “What gives!” [Laughing] We still haven’t gotten an answer—It would have been a good opportunity, but we’ve just got to roll with the punches.

MAX INK: What does your headlining tour hold in store?
SHADDIX: We’re taking out a band called Bullets & Octane, and Hed P.E. is our main support. It’s cool, it’s a diverse show. We’re excited about this run, because we haven’t done a headlining run in the States in a while now, and the ticket sales are going good. We’re playing like an hour-fifteen; Eight new songs off “The Paramour Sessions,” and pretty much three or four songs off each record. The new songs keep it fresh, then we flip it up a bit, like we gave “Dead Cell” a more punk rock feel. There’s a good ebb and flow to the set. We just rip it up every night.