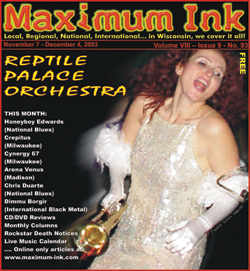 I didn’t recognize the band name, but I decided to check it out anyway. They were already on-stage. Dancers grouped in front of the stage as the band launched into their next number, which the lovely lady singing, announced as “Kochari.” The dance floor came alive as body parts were swung to and fro. More numbers followed fusing world music and ethnic styles. One song was in Spanish, the next from Bulgaria, then another in Armenian. Then Turkish, Finnish, English, Italian, Greek, and occasionally a song in a gypsy dialect. As the band played on, I tracked down a bartender and asked him to tell me more about the band.

“Well, let’s see,” he began. “The band started back in the early 90’s in Madison by Bill Feeny. Things went well and people liked them.”

The Reptile’s discography spans the decade. The first two albums, “Early Reptile” and “On the Wings of Skink ” were self released. then came “Hwy X” and “Iguana, Iguana” released by Omnium records. 2003 celebrates the release of, “We Know You Know,” also on the Omnium label.

Outside the band, the members of RPO are accomplished in their careers, with several in the academic field. In the band, they are committed musicians who spend time in other bands as well!

There are always rotating guest musicians on their albums and during live performances, but the constant in the equation are the core members; Bill Feeny on guitar, vocals, and graphics, Anna Purnell on trumpet and lead vocals, Seth Blair on electric six-string cello and vocals, Ed Feeny on bass guitar, Timm Gould on saxophone and clarinet, Robert Schoville on drums and percussion, and finally, Biff Blumfumgagnge on violin, mandolin, therolin and vocals.

What is a therolin you ask? It’s one of the many Biff Blumfumgagnge creations: a five-string electric violin with a theremin hiding inside. Another creation is the mando-synth: an electric five-string mandolin with a synth pickup and whammy bar.

“We’ll be right back after a short break!” announced Anna from the stage. Much to my delight, Biff headed to the bar and ordered a drink. “BIFF ?” I yelled over the bar noise. I strolled closer and asked him about the other crazy instruments he’d developed over the years.

“I’m working on a bowed banjo which sounds very similar to the Morinn-Khuur, the amazing Mongolian instrument made entirely of horse parts. There’s also a balaika hanging on my workshop wall that’s been begging for a whammy bar. Also, I finally got an Egyptian OUD. You’ll hear that later.” You can find out more information on Biff’s experimental instruments at Beeftone.com…click on Beefy Links.

Noise and movement from the stage caught Biff’s attention and he headed back. The next set began and the club was once again hopping to the enchanting Reptile Palace Orchestra music. I joined the throng and danced the night away. I awoke the following day to the sound of my cell phone announcing the morning. I had fallen asleep listening to a copy of “We Know You Know” that I purchased after the show. In fact, before I went to sleep I had checked out all the bonus info on the disk, including the band’s extensive bio and history, lyrics, 14 bonus mp3s, and other great stuff.

The Reptile Palace Orchestra will be in Madison Saturday, November 15 at the Memorial Union @ 10pm. For more information on the Reptiles, go to www.beeftone.com.