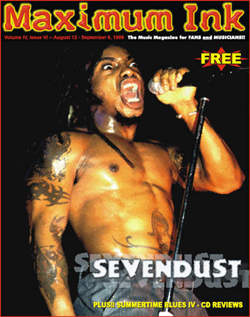 Sevendust have performed 462 shows over a 21 month span, spending their first few months on the road in a van, graduating to an RV, and not relocating to their first tour bus until their second year of touring. Show No. 462 was followed by a much-deserved three week break, which immediately segued into three months of writing, two months of recording, two more weeks off, a week of rehearsal, then a return to the road for a recently completed run as a headliner of the Vans Warped Tour. Did we mention their prime billing at Woodstock ‘99? Now, with the August 24 release of sophomore effort Home and their current tour with support acts Powerman 5000, Staind and Skunk Anansie, they’re ready to start the cycle all over again.

Yes, the Atlanta quintet have come a long way since appearing on the cover of Maximum Ink back in April ‘97. It was then, little more than two years ago, that hard rock and heavy metal were struggling to regain a foothold in a scene ruled by alterna-rock radio. But times have changed. Case in point, Madison’s 94.1. WJJO made the conversion to a hard rock format just as Sevendust entered the scene. It’s clear that they’ve helped each other with the success both have achieved.

“We’re proud of what we’ve pulled off, but it was such a blur, I hardly remember a lot of it,” says drummer Morgan Rose, still slightly stunned by the pace his band has kept over the past two years-plus. “The biggest negative is that we lost our handle on reality back at home. That was really tough, and everything has changed back there-the friends that we had when we left have changed, and we’ve lost a lot. But we’ve made a lot of new friends on the road, and it’s almost become our new home now, out on the road.”

Hence the title of their sophomore release, a blitzkrieg of metal so blinding, it’s hard to believe there was a time when the Atlanta quintet were shocked to have sold just 10,000 records. A few months later, 10,000 turned to 100,000, and tours with Limp Bizkit, Megadeth and OZZfest helped propel their numbers to the elusive Gold status-500,000 copies sold. “We started as a band with a following of 450 people, and two years later have sold 500,000 records…” recollects a wide-eyed Rose. “I still can’t get over the fact that 500,000 people paid money to hear our music!”

But they have, and barring even the cruelest treatment from the Gods of metal, Home is poised to take Sevendust even higher. As pummeling as their self-titled debut may have been, it’s follow-up is Sevendust shining their full-metal racket to a lustrous sheen, frontman Lajon Witherspoon punching through the dual guitar attack of John Connolly and Clint Lowery with vocals that tremble with soul, then terrify at their most brutal heights.

Highlights include “Headtrip,” humming like an 18-wheeler careening down an interstate, “Waffle” whipping around Connolly and Lowery as Witherspoon belts through bassist Vince Hornsby’s bending strings, and “Rumble Fish” accelerating into a maddened frenzy. An appearance by Skunk Anansie frontwoman Skin turns “Licking Cream” into a haunting voyage led by two of the genres best voices, while Deftones frontman Chino Moreno helps transform “Bender” into an album-ending vocal onslaught.

“We had a lot to bring to the table,” nods Witherspoon. “We were on the road for two years, and we learned a lot about ourselves. We wanted to go somewhere sonically where we haven’t been, growing more melodic, and tapping into a heavier side of the band. We did a lot of thinking and collaborating. No one is a leader in this band, Sevendust is all of us, and we all have something to add.”

They never intended to write a concept album, but Home is just that, focusing on the realities of life on the road, the band’s tumultuous two years of excess and recklessness, and their place in metal as the genre prepares for the new millennium.

“Every song on this record is about trying to pull your life back together, being weak and being able to pull yourself back up from the ground,” says Lowery. “This album is about how hard it is to be away from everything, with no sense of stability. It’s about our personal lives, but we don’t get into the specifics. It’s aggressive words, aggressive lyrics, and it’s sad at times, but it doesn’t tap into anything violent. We have a responsibility to ourselves to write music that makes us happy, and I don’t think anyone can pull any negativity from that.” But they also know that there’s an upside to all the madness. Both Witherspoon and Rose will be fathers this fall-Witherspoon’s girlfriend is due in late August, and Rose’s wife, Coal Chamber bassist Rayna Foss, is expecting in late September-and the band achieved their success without being pampered by the industry. “We toured in front of 50 people a night for a long time,” says Rose, “we didn’t have the advantage of touring in front of bands like Pantera early on… It’s all just a dream come true. This is the dream, to be able to survive and play music as your ‘job’-if you want to call it that, because this isn’t a job. There’s nothing like the excitement of getting up and playing in front of people.”