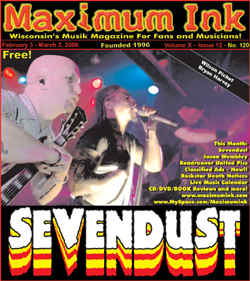 Onstage, Sevendust frontman Lajon Witherspoon is widely acknowledged as one of hard rock’s most gripping performers and electrifying voices. Offstage, he’s seldom heard, mellow as a church mouse, and as mild-mannered as they come.

But something has changed.

Less than a week into his band’s first tour in more than six months, Witherspoon gets notably agitated when asked about the prospects of hitting the road in support of two albums - their first studio effort since joining forces with new label Winedark Records, and the recently issued greatest hits album issued by their former label.

“I think it’s ridiculous!” he says, his voice hitting a fevered pitch. “Not that we should be surprised, but in this jaded world of the music industry, the bunch of backstabbing, political assholes that you have to deal with - not unlike the ones everyone in life has to deal with - have done it again. Sevendust gets a new record deal, and right after we release our new album, the people that we were with for so many years turn around and release a ‘best of’? I would like to at least think that I would be fifty or something before this came out… At least let’s break up and get back together before pulling this shit!”

Make no mistake, Sevendust have no intentions of breaking up. In fact, after the departure of guitarist Clint Lowery in December 2004, the four remaining members - Witherspoon, guitarist John Connolly, bassist Vince Hornsby and drummer Morgan Rose - didn’t miss a beat. While awaiting the deadline for then-label TVT Records to renew their option with the band (a deadline they missed, which freed the band to sign with Winedark) the quartet secured a bank loan and entered the studio on their own to begin writing the material that would become Next, their fifth studio effort overall.

The results are Sevendust’s most visceral output since their self-titled debut in 1997. From Rose’s blast-beats and the piss-and-vinegar guitar spray of opening track “Hero,” to the Slipknot-flavored heavy metal onslaught that reverberates through “Pieces” and the pointed rage of “The Last Song,” into the soft, supple harmonies of “This Life” and beyond the final acoustic pangs of closing track “Shadows In Red,” Next is Sevendust’s crowning achievement.

“We did this by ourselves, so there was nobody to come in and tell us that something didn’t fit,” explains the frontman. “We know that with the songs on this album we can go out with Fuel, then come back and do a show with Slipknot, and that’s not something we’re concerned about. We just wanted to get our music out, by any means necessary. Yes, I’m angry, and this is a very emotional album, about emotions that anybody could go through, be they upset, angry, or even making love. It’s all there, and it’s a great energy.”

Adding to that energy is the addition of former Snot and Amen guitarist Sonny Mayo, a presence Witherspoon describes as “focused and exciting” and likens to “having a new girlfriend in the band, someone who looks at things in a different light and reminds us not to take what we have for granted.”

Because, for a while there, it was getting pretty easy to take things for granted.

“For a little while, the business side of things did make everything a little less fun, but think of all the time we spend touring, only to come home and see our manager in a new car, someone else in the organization with a new lake house, and all I’ve got is a free t-shirt! It definitely dampened us. This is our passion. We’ve taken so much, and lost so much, all just to get to do this. So to be still doing it eleven years later, anything that involves Sevendust or the music industry, yeah, we’re going to be passionate about it. I wouldn’t say I’m bitter, but I am very leery and cautious.”

Sevendust are performing Feb. 10 at the Pearl Room in Mokena, IL, Feb. 11 at the Checkered Flag in Appleton, WI, and Feb. 12 at the Rave in Milwaukee. Supporting on all three shows are Nonpoint, Wicked Wisdom and Social Burn.