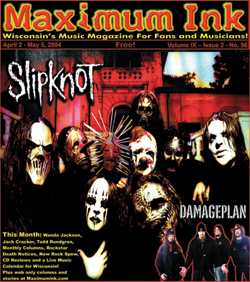 Slipknot's second time on the cover of Maximum Ink

Did you ever open a garbage can on a hot summer day only to be greeted by the offensive stench of a larva of freshly hatched maggots? While this image is enough to make your skin crawl and your nostrils flare, this summer will most definitely bring a new host of maggots to a mosh pit near you!

Slipknot is back and better than ever as each day brings us ever closer the release of their third album and several summer tours to get their army of maggots back into battle. I was contacted by one of the maggot leaders from their snow covered base in Iowa. He was simply called # 3 (aka Chris Fehn). We discussed Slipknot’s plans for world domination in 2004.

I often wondered what was behind the name Slipknot in the first place and since this year is really a rebirth for them as a band, I wanted to know where the idea for the now infamous moniker came from. “Basically, Slipknot was just a song title that we had at the beginning. And we were looking for a name and we just stuck with that. As far as any real significance, it’s definitely not the stupid noose thing. I don’t have a glorified answer for you about what it actually means.”

“Volume 3: The Subliminal Verses” is set as the title of their third release which drops May 25th. The first single entitled “Pulse of the Maggots” will be unleashed on March 30th and available for download at their web site - www.slipknot1.com I asked about the decision making process in choosing the name and if it had any significance. “Everybody could come up with whatever they want and we just kind of throw things back and forth. We’ve got nine people trying to figure out one title so it was kind of hectic. We run through as many options as we can and when that one came up it was basically the final vote that stuck. And it kind of just ties together the whole thing with everything that’s gone on in the last couple years as far as being apart and all the stuff that we’ve gone through. All those things in our conscious minds had a lot to do with making this record.”

This time around Slipknot chose Rick Rubin instead of their usual knob twister Ross Robinson. Fehn said “Ross was going to do The Cure at that time so we needed to have somebody. We’re just definitely fortunate enough that we can work with such amazing people in the industry. Rick has done Reign in Blood and the Red Hot Chili Peppers’ records, Beastie Boys; you name it. We’re just very lucky that he would even want to work with us, so of course we’d jump on the chance.”

MI: I’m sure that adds a whole new dimension to your sound.
CF: “One of the very first things he said was ‘You’re a very extreme band and your music is very extreme, but totally quiet is also extreme so don’t be afraid to do things like that and step outside of your box a little bit.’ That kind of opened the floodgates for this record and we started coming up with all kinds of cool stuff. Even though it’s not, say - “Iowa,” it’s just so heavy in a quiet way; it’s just trippy.”

I wondered what the biggest difference between the two producers was and Fehn was quick to answer: “Ross is really an in your face producer and is in there whipping pots and plants at us and really bringing it out that way. Rick takes a more stand off approach and basically lets you expand your mind as far as the recording goes.”

The new album was recorded at the Houdini Mansion in the Hollywood Hills, which is rumored to be inhabited by ghosts. Was there a reason for this? “The Chili Peppers did that whole record there so it has a little bit of history. Basically, it was a place where we could all be under the same roof again. So we could become friends again and live together and record together under the same roof. A lot of time had passed and we really needed to be together to focus on this record. Living there was awesome because the studio was in there and if you had an idea at four in the morning you had a place that you could go and record. It was non-stop recording Monday through Friday and we took Saturday and Sunday off.”

I decided to probe deeper into the psyche of the maggot leader and find out what the biggest difference was between this album and the last two. “I just think the maturity in the writing. We had a lot more time to spend on this record. Once we recorded a song, we had a lot more time to dive into it and keep adding things and rearranging things. Corey would change words and stuff like that so I think there is just a lot more maturity in the writing and it’s very diverse. It’s going to take you on a journey from beginning to end kind of like The Wall or something. It’s just really amazing how different the songs are. There are heavier songs than ever that we’ve written on there, yet, there are softer songs that are still heavy in a way.”

MI: You know you’ve made it big when your fans form a tribute band. Some musicians from Chicago did just that with a Slipknot tribute band called Disasterpiece. They are even planning a national tour.
CF:  “Right on man! I’m anxious to see it. Are we that big now that we have our own tribute band? Maybe we’ll have to let them open up for us one day.” Even though that may be cool, I would be willing to bet that the real Slipknot would blow them off the stage.

MI: Are there any unsigned bands out there that have caught your ear?
CF: “Well, not really. Music today is pretty stagnant as far as I’m concerned. I basically listen to all of my old metal. Right now I listen to a lot of Superjoint Ritual. As far as anything that is on the radio now, definitely not. It just bores me.”

Slipknot looks to be headed down a long and winding road tour. They signed on to headline the Jagermeister Tour with current and former Roadrunner label mates, Chimaira and Fear Factory, which kicks off on March 30th in Orlando and ends May 15th in Sacramento. Be sure to check them out when they invade The Rave/Eagles Ballroom in Milwaukee, WI on Saturday, April 24th. Then they will head over to Europe with Metallica until early July. After a week off they will co-headline the second stage at Ozzfest with Hatebreed until it ends on September 4th. This year’s Ozzfest will be held Saturday, August 14 at Alpine Valley, WI.

CF: “I’m not sure what we’re going to do (after Ozzfest). We might hit Japan or Australia again and I’m sure we’ll do our own headlining tour, probably across the world. There are a lot of festivals to do and it’s going to be a really great year for us!”

MI: I only wish we had the kind of festivals over here that they have in Europe. Some of the best bands in the world come together in Europe and you can’t get them on the same bill in the States.
CF: “Yeah, totally! Its crazy man and the fans…dude - they are nuts! It’s very cool that we are able to play those festivals.”

MI: This band must really be the way to live your dreams and meet bands that you grew up listening to.
CF: “I just remember having all those old Slayer and Metallica records and just being like, man, I wish I could do that someday and now I’m truly blessed. I couldn’t imagine doing anything else!”