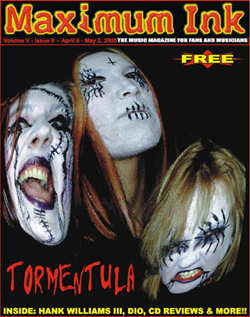 “Whorrorcore,” was the reply that I got from Tormentula drummer / vocalist Alice Bludgeon when I asked her to describe Tormentula’s music. I’ve wanted to do a story on Tormentula ever since their CD, Submit You Unworthy Soul, came out last summer. Not a pretty record and occasionally not easy to listen to, but nonetheless a superior record of enraged estrogen recorded for all of the world to hear and one of the best hard rock CD’s to come out of Wisconsin. So impressive is Submit Your Unworthy Soul, that the CD was stolen from my office while I was setting up this article.

I wasn’t sure what to expect from these women with faces made up better than KISS, playing music to stomp gonads to. What I did find was an intelligent and articulate woman (drummer / vocalist Alice Bludgeon) whose love for rock and roll music is as passionate as Angus Young. “I think that music should be challenging to the musician and to the listener,” said Bludgeon.

Tormentula consist of Manerva Scurvy on guitar, Dr. Morticia Mangle on bass and of course the charming Bludgeon. They’ve played a number of shows the last couple of years, in Madison as well as Milwaukee and Chicago. “Some clubs are afraid to book us because of the way we look and sound,” said Bludgeon. “What inspires me doesn’t necessarily inspire anybody else.”

Veterans of many Madison area bands, Tormentula has survived being labeled as gimmicky. They love wearing their make-up and even wear it while recording. “It’s like a ritual, putting it on,” said Bludgeon. “It gets you excited and ready to play. It gives you the opportunity to take on another personality. It’s like you’re going to war.”

The reason for the longevity of Tormentula is the fact that they play loud and aggressive music with a major groove to it. Their simplistic, yet unambiguous lyrics reflect the hell that we all must live in our day-to-day lives. “We going to keep going out on a limb and not stick to the same thing either,” said Bludgeon. “It doesn’t work forever, so we’re going to keep changing it too. Think of all the best musicians. All the bands that I like always change things. They put something in there that’s surprising.”

Tormentula is currently recording a four-song single for Speakeasy Records at Coney Island recording studios with the renowned Wendy Snieder at the controls. Bludgeon explained to me what to expect. “There’s music that just rocks straightforward, through and through and you just get into it. You can hold onto to it because it’s rock. You’re late to it in a primal way. But then there’s stuff that makes your skin crawl and irritates you unsettling and hard to digest. That’s challenging. I think that that is the kind of music that I like making and sometimes, the kind of music that I enjoy listening to. Depending on how annoying it is.” I can’t wait to get my copy stolen.