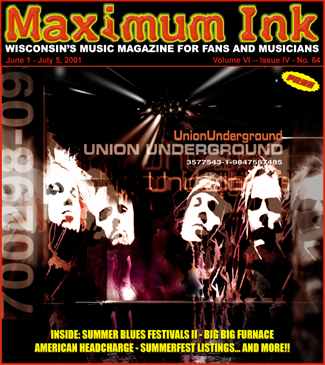 The Union Underground on the cover of Maximum Ink June 2001

It’s 3 o’clock in the afternoon, and Bryan Scott sounds like he’s been up for days. One of the handful of fortunate bands to participate in this year’s blockbuster “Ozzfest” tour, Union Underground’s lead singer is tired, but still going strong. “We’re leaving for Europe for three weeks, then back home for like a day, then we’re doing Ozzfest for like three months”.  Fatigued but eager to talk about his band, Scott begins recounting the life of a hard working musician on his way to the top, and his participation in the festival of the summer—Ozzfest.

For Scott, Union Underground began ten years ago when he met guitarist Patrick Kennison. Scott laughs, saying “Patrick and I have been teaching each other guitar since we were 14. I was the guy in school wearing the Guns-N-Roses T-shirt and he was the guy wearing the Metallica shirt.  We’ve basically been married for 10 years.”  Scott’s love of music began as soon as he purchased Motely Crue’s “Shout at the Devil”, and he’s been singing hard ever since.

In the plethora of neo-metal bands currently flooding the airwaves, Scott declares The Union Underground emulates a different sound and a different attitude. “We have an industrial flavored thing.  In general we have just a little more old school rock attitude than the theatrical gimmicks some bands have going today.  We’re just a little more straight up.”  The Texan quartet belts out a basic, hard rock sound on their debut CD “An Education In Rebellion” with the potential of generating mass appeal. No make-up.  No multitude of demons to exorcise.  Just hard hitting music.

When asked the meaning behind the radio smash single “Turn me on Mr. Dead Man”, Scott says it’s about burned out musicians.  “The song is really about my perception of “rock stars” and what they’re all about.  Music today has lost a lot of soul—musicians treat it like a career, not a lifestyle.” And Scott is grateful for all the good fortune The Union Underground’s lifestyle has produced in the past year.  And, hearing the Ozzfest venue would include Lars Ulrich’s newly signed group “Systematic”, Scott and the band quickly formed a union, as well as with newcomer band and fellow Ozzfest patron “Taproot” in hopes of joining the crew.

“Jack Osbourne, Ozzy’s son, caught up with us at a gig and asked us to join the tour”, Scott recalls. “Sharon Osbourne isn’t too down with a lot of the new bands today, so she leans on Jack to get a lot of groups.  We saw Jack at a show and it just worked out.”

This is The Union Underground’s first appearance on Ozzy Osbourne’s “Ozzfest” mega-tour, featuring a multitude of heavy-metal, hard core groups from all over the country.  And from the looks of their tour schedule, the foursome is far from rest.  But for Bryan Scott, his music is his way to life, so he’s willing to go the distance.

“It’s all about the fact that we decided that [we] wouldn’t let anybody keep [us] from [our] goal. It’s living outside of the normal boundaries of society.  The songs are autobiographical and about the people that were around us.” Like the song “Natural High”?

“I grew up with a lot of drug use in my household”, Scott continued, alluding to the drug references within the song.  “When you grow up around it, it’s like a big cycle that’s hard to break. When you grow up around it, that’s what you know. But after a while I said ‘I don’t want to end up the same way.  I don’t want to be there.’” Scott stresses his intent is not to preach.  He’s just telling his own story, and it’s all about reaching the ultimate achievement playing music.

So Scott, Kennison, Memolo and Moyer will continue to tour—not because it’s their career but because it’s the life they want to lead.  “I just wanted something different”, Scott insists.  “It hasn’t been easy.  But all I can do is write about it.”