Alter Bridge on the cover of Maximum Ink

If you have tickets to see Alter Bridge in Chicago, Thursday, September 30th at the House Of Blues, I congratulate you. Some will envy you, though, because it sold out. If it’s any consolation, the guys won’t be packing up and heading out right after that show. They’ve just announced a 2nd show the following night, Friday, Oct. 1st at the same venue! It gets better, though; tickets for the Friday performance at the HOB are $9.47 thanks to 94.7 The Zone and a show at the Rave in Milwaukee is scheduled for Saturday, October 2nd.

In short, here’s the scoop…Creed is finished, Stapp’s doing whatever it is he does, and the rest of the band have moved on. Mark Tremonti (guitars) and Scottie Phillips, (drums) have formed a new band, Alter Bridge, with vocalist Myles Kennedy (formerly of Mayfield Four).  The new album “One Day Remains” is a melting pot of metal, love, memories, sadness, gratitude, happy thoughts and a good dose of guitar solos. That doesn’t sum it up, but I have to start somewhere.

I recall seeing Creed live in the past and remember wanting Tremonti to go on with it…keep playing, don’t stop for Stapp! That’s not enough, tear it up, just rip the hell outta that song… with heavier riffs…tell Stapp to shut-up and let Mark play! I knew he had it in him! Well…this Alter Bridge CD does all that and more. But it isn’t just Tremonti that’s kickin’ ass and making waves, he has Scottie on drums and a new singer.

Last October, Mark and Scottie called up Myles Kennedy. His band, The Mayfield Four (Seattle) had opened for Creed back in the day, and having been impressed with his singing, Mark wanted to see what would come of Myles laying down a few tracks. Apparently, things went well. (Samples at www.alterbridge.com)

Last, but certainly not least, the line-up includes bassist Brian Marshall. That’s right, the original Creed bassist. But I’m not bitter. That whole thing about Brian exiting the band left a sour taste in the mouths of creed fans across the globe, so perhaps if I am bitter, I’m not flyin’ solo here.

Brian was “unceremoniously dismissed,” as he puts it, from Creed back in 2000, and a touring bassist, Brett Hestla (frontman of Virgos Merlot/Virgos) did a fine job of filling the spot till the band split. Much ado about something filled headlines upon Brian’s departure and rumors were abounding in trends. Speculation filled the gaps, but Brian says “It had come to the point where Scott and I, because of our personal differences, couldn’t stand to be on stage together anymore.” There’s always more than meets the eye, but in short, Brian was dismissed. Tremonti and Phillips seem to have come to a crossroads void of animosity, though. Last year, they called up Brian to discuss their new project and the winds changed for the better. 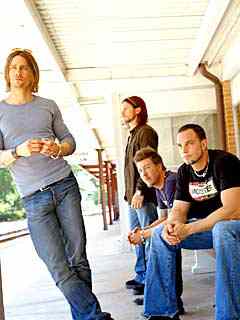 What was it like for Brian to hear from Mark after all that time? “It was great. After I had been dismissed from the band years ago, I went through the emotions with them. I was a part of that band for 3 years and 2 CD’s and so because of that…even though I was removed, I felt what they went thru - the heightened emotions, and also felt some of the pitfalls. Last year, when I heard from Mark, I was surprised and it felt good to get things out in the open. We talked, myself, Flip (Scottie) and Mark, and just laid things on the table. It felt good to really resolve things.”

Things change, people change, time heals all wounds. Along with time comes maturity and Brian’s feeling optimistic about how “much more mature and focused Alter Bridge is. We know what we want. We’ve grown and we look at things differently. It still feels very exciting but we are all grounded and not worrying about things. One thing at a time with no drama, no egos.”

While Brian says he’s not the best public speaker, and prefers to speak through his music, it’s his personable demeanor and candor that plays a fine tune. Along with a good old southern, genuine nature, he’s a heavy metal music fan but loves various brands; from Acoustic Alchemy and Rush to Led Zeppelin and Faith No More. He’s honestly grateful and appreciative to no one more than the fans. “We just love ‘em to death; no one does it better, no one can spread the LOVE of music better than the people it touches. They do more than anyone else, ya know? They spread the word like wildfire! If it weren’t for them, where would we be? There was a time when Creed became almost ‘untouchable’ but we don’t want that. I missed the guys, missed playing with them on stage and I’m so excited to be out there doing what I love with Alter Bridge. We’re gonna take this all the way.”