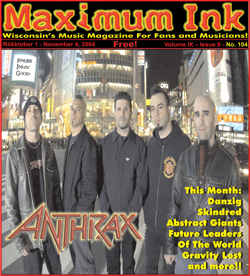 Throughout their infamous 20 year career, the mighty ANTHRAX has always prided themselves on being a band of the people, for the people and by the people. This being said and with 2004 being an election year, ANTHRAX have taken that ideal one step further with their upcoming release, THE GREATER OF TWO EVILS, an all out assault on their history with each song being voted on by their fans via the Internet.

Recorded “live” in the studio over the course of two days, THE GREATER OF TWO EVILS stands out, as guitarist Scott Ian puts it, “As a raw, balls out, and in your face representation of how brutal this band is, was, and will always be.”

Covering their history from 1984 1990, THE GREATER OF TWO EVILS is made up of fourteen classic ANTHRAX songs the fans demanded by way of the thousands of votes from all over the world received on the band’s official website, anthrax.com. Based on those votes, the band entered Avatar studios in NYC one cold and snowy weekend last winter and took a trip back in time to revisit songs from their formative releases Fistful Of Metal(1984), Spreading The Disease(1985), Among The Living(1987), State Of Euphoria(1988), and Persistence Of Time(1990).

“It was just the five of us in a room ripping. It was intense,” Ian continues, “like when we first wrote these songs and started playing them for the first time. Except now the songs have evolved after years of playing them live to where I wish they were when we first recorded them. Like good whisky, they’ve aged wonderfully. There’s so much energy on this record. Busting the tracks out live in two days was definitely the way to do it. What’s crazy is when I listen to it it’s like I’m listening to it from outside the band because it’s made up of all these old songs that we haven’t played much over the years and I really only know the studio versions so when I hear John singing them, it’s like I get to here it from your point of view if that makes any sense. And let me tell ya, John and Rob are killing on this.”

“Our fans have been so loyal over the years that we wanted to give them something special,” explains drummer Charlie Benante, “so we came up with the idea of letting them pick the songs for this album.  Not to take away from our past, but ever since John has been in the band, people are always coming up to us and saying ‘I wish you would re-record this’ or ‘I would love to hear John sing that,’ so we did it and it came out great.”

A point that lead singer John Bush expounds upon, “When I joined Anthrax 12 years ago we wrote and recorded Sound Of White Noise. Although, at that time, we felt we were going to play a lot of those tunes live, there was still a giant catalog of older songs for me to learn. From that time until now I’ve embraced those older songs like they were children of my own. Taking nothing away from the original versions, because they definitely stand tall on their own, it felt like a good idea to give the fans the choice if they wanted to hear new versions of these songs and which songs they wanted to hear the most. This is not an attempt to relive the past, just an attempt to kick ‘em out with the 21st century line-up of Anthrax.”

And kick ‘em out they do. Well known songs like “Caught In A Mosh,” “Madhouse,” and “Indians,” get the update as well as lesser know songs such as “Panic,” “Gung Ho,” and “Deathrider,” with the latter getting the biggest over-haul. Charlie Benante explains: “While we didn’t want to deviate too much from the original recordings, we didn’t want to be strapped to them either. There are a few changes here and there with “Deathrider” being the one that stands out the most. On our first album, Fistful Of Metal, that song is a blast from the beginning to the end, one speed, that’s it. On the new version it’s still fast, but we pull-up a bit in the verses going to half-time, which makes it heavier and flow better. No one will be disappointed…Trust me.”

All the artwork for THE GREATER OF TWO EVILS was done by Shepard Fairey, the subterranean legend best known for his Andre The Giant inspired OBEY graphics. “We wanted something different this time out,” says Benante who serves not only as drummer and songwriter but as the resident art director as well. “Our last two releases we used famed painter Alex Ross who did two unbelievable covers for us (2003’s critically acclaimed We’ve Come For You All and their live DVD/CD Music Of Mass Destruction which was released earlier this year.), and we wanted to go in a slightly different direction. The cover is very ‘flat,’ in a good way, and the colors are striking. It will work great as the cover, in posters, t-shirts, whatever, it’s just a cool image.”

ANTHRAX hopes that THE GREATER OF TWO EVILS serves as a history lesson and a starting off point for the whole new generation of fans who were turned onto the band over the course of the last couple of years, something that was quite evident during their never-ending 2003-04 MUSIC OF MASS DESTRUCTION World Tour. On that tour, which took them to virtually every continent on the planet including shows in Russia, the Czech Republic, Poland, and Hungary, the members of ANTHRAX were noticing that their crowds were being made up of kids who were not old enough to be around when the previously mentioned Among The Living was released some years ago. “Its weird,” says Benante, “when I talk to our fans I find myself amazed that we have made such an impact for all these years. When we first started we were kids with nothing to do who just wanted to play.  The fact that we have been around for a generation and continue to play to thousands of kids all around the world 9 months out of the year, I would have never have believed it. I think this album brings it back full circle.”