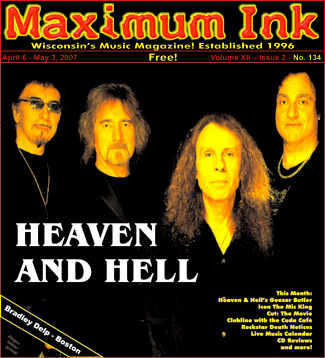 Ah, the sordid and storied life of a rock and roll band; make it a heavy metal group, and the drama is always, for lack of a better term, amplified. Sometimes, it’s hard to even know where to begin. In this case, the beginning is somewhere in the middle…

When Ozzy Osbourne left Black Sabbath in 1979 (or was asked to leave, depending upon who you ask), the group replaced him with veteran vocalist Ronnie James Dio. Having recently parted ways with Rainbow, Dio was not only available, but also a known commodity, and his addition to the Black Sabbath ranks made it a sort of metal supergroup. Dio and original members Tony Iommi, Geezer Butler and Bill Ward went to work writing new material.

The resulting album was “Heaven and Hell,” both an instant classic and a return for Black Sabbath to the core of their musical style, a mode from which they had drifted significantly in their last years with Osbourne. Through heavy touring and the success of the album, Black Sabbath managed to avoid the drop in popularity that almost always follows the departure of a charismatic lead singer. If anything, their popularity grew.

Drummer Bill Ward left the band due to health problems after the “Heaven and Hell” tour, but Black Sabbath soldiered on and produced another amazing album, “Mob Rules.” The group toured again (with Vinny Appice behind the kit) and simultaneously recorded a live album on the tour. During the mixing of that recording, which would eventually be deemed “Live Evil,” problems began to grow amongst the band members. There were accusations between the new guys (Dio and Appice) and the remaining founding members (bassist Geezer Butler and guitarist Tony Iommi). Within months of the live album’s release, both Dio and Appice had left the group.

Ronnie James Dio went on to form his own band called, quite simply, Dio. Simultaneously, Geezer Butler left Black Sabbath to pursue other paths while Tony Iommi kept the Black Sabbath name alive with various and ever-changing lineups of musicians.

In 1992, Iommi moved to reunite the Dio lineup of Black Sabbath; Butler, Appice, and Dio joined the guitarist once again to record a new album called “Dehumanizer.” They hit the road again, finding themselves in front of huge audiences throughout the world, but it wouldn’t last long.

Toward the end of the “Dehumanizer” tour, Ozzy Osbourne – hugely successful as a solo artist –  announced that he was retiring from rock and roll (that didn’t last long, either) and asked Black Sabbath to join the bill for his last two solo concerts in California. Dio refused to participate because he felt Black Sabbath shouldn’t be reduced to an opening act for Ozzy. The others disagreed, however, and appeared without him, recruiting Rob Halford of Judas Priest to sing. Ozzy ended up joining his old Sabbath mates on stage, and the four original Black Sabbath members decided to reunite. Dio , head held high, regrouped his solo band.

So, it is from this rich history that the Dio-era Black Sabbath now returns, some 15 years later, with a new album and a new tour under the band name Heaven and Hell. Maximum Ink recently had the chance to speak to bassist Geezer Butler about this latest incarnation of the band and get his take on all things Black Sabbath:

MAXIMUM INK: Back in 1979, when Black Sabbath first auditioned Ronnie James Dio, is it true that “Children of the Sea” was written in the first rehearsal?
GEEZER BUTLER: I think so, what I can remember of it, at least. Tony Iommi met Dio at a party and they originally talked about doing something together, you know, another project. They might have jammed some, but then Ozzy left the band. So Dio started to jam with us [Black Sabbath], and I think in one of those early jams, perhaps the first one, “Children of the Sea” came together.

MAX INK: Were there any social issue caused by having an American in a British band?
BUTLER: No, not at all. Didn’t even think about it, really. I mean, my wife is American, my children grew up in America, you know? Didn’t matter a bit. It just came together. It was the right thing at the time.

MAX INK: You have three new songs on the new best-of CD, Black Sabbath: The Dio Years: “The Devil Cried,” “Shadow of the Wind” and “Ear in the Wall.” Was the writing process more-or-less similar to the way things were in ’79?
BUTLER: Completely different, actually. Tony went to see Ronnie’s band in 2005. They got to talking, jammed about a couple of times just for old time’s sake, and then the record label got involved. They started asking if we had any unreleased material, which we really didn’t have. Then I got involved and those songs started coming together from that point on.

MAX INK: Did the band select the tracks on the new CD?
BUTLER: We left it to the record company. If it’d been up to us, you know, we’d never have gotten a list together. Each of us would have had a different list. So, we left it to neutral input, which was the label. We’re quite happy with it, a good representation, I think.

MAX INK: As I’m sure you recall, in October of 1980 there was a riot in Milwaukee during a Dio-era Black Sabbath concert. Has that incident has any affect on Sabbath playing in Milwaukee?
BUTLER: Oh no, that doesn’t affect us deciding to play Milwaukee or not, no not at all. I mean, you’ve always got some idiot somewhere, right?

MAX INK: All of us in Wisconsin are apologetic for that idiot’s behavior…
BUTLER: Well, thank you. Could’ve happened anywhere, though.

MAX INK: Can you recall any details of the incident?
BUTLER: It’s all a big misunderstanding, really, The lights were down, first of all, so unless the fellow was some sort of incredible quarterback, I don’t know how he could have hit me on purpose. But I was knocked out, and the band was busy getting me off the stage and to a hospital. When the lights came back up, there was no band on stage. And of course, the crowd freaked out. Someone should have gone out and explained – the promoter or someone. I mean, the band was worrying about getting me to the hospital, you know? So the crowd freaked out because there was suddenly no band on stage, and things got worse from there.

MAX INK: Has anything like that happened elsewhere?
BUTLER: It was worse back in the ‘70s, because no one was going through metal detectors and you didn’t have as much space between the band and the front of the crowd as you do nowadays. People threw a lot of beer cans in the ‘70s. Once, in San Francisco, someone threw a huge iron cross on the stage. It bounced up, cut three strings on my bass, and the end of it poked me in the eye. Luckily, I didn’t lose my sight or anything. But that was quite an incident.

MAX INK: Black Sabbath have come to be credited as the undisputed inventors of heavy metal, and rightfully so. Among the metal pioneers mentioned in the same breath as Black Sabbath are Led Zeppelin and Judas Priest; Deep Purple are rarely mentioned. Do you think they are being overlooked as heavy metal pioneers?
BUTLER:  Maybe. I think their early singles like “Hush” and “Kentucky Woman” have something to do with that. Wasn’t heavy at all. They got heavier later on.

MAX INK: Jon Lord was the one really chunking in a metal way, but he was doing it on the organ.
BUTLER:  Yeah, Jon Lord, they had that going. But, you know, they were just doing their thing just like we in Black Sabbath were doing our thing. You’re not thinking about whether or not you’re inventing heavy metal or punk or grunge or whatever. You’re just playing what seems right to you, and that’s it.

MAX INK: Why isn’t the group being referred to as Black Sabbath while Dio is the singer?
BUTLER:  We wanted to separate it from the original Black Sabbath since we got together with Ozzy again. And there’s the Rock And Roll Hall of Fame. We got inducted into it with Ozzy, and that’s become the main lineup. We didn’t want to make it confusing with the Dio version of the band.

MAX INK: Are there plans to tour with Ozzy Osbourne again?
BUTLER: I can’t say for sure, we’re leaving it open.

MAX INK:When does the Heaven and Hell tour wrap up?
BUTLER:  I believe it’s around Christmas, perhaps January of 2008.

MAX INK: Any final words to your fans in the upper Midwest?
BUTLER: Oh, absolutely – we’re looking forward to seeing you all very much!