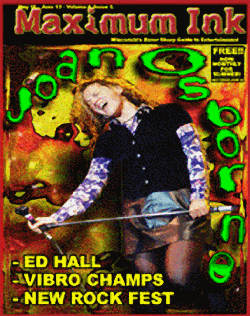 If God were one of us, and his tour of duty brought him to Milwaukee, it’s a safe bet that he’d fill more seats than Joan Osborne did at the Modjeska Theater. Not as safe a bet is whether he’d be able to sing as well.

With five Grammy nominations under her belt, the question wasn’t if Osborne would sell out the 1,800 seat Modjeska, it was how quickly. Imagine the surprise when hundreds of tickets remained minutes before the Kentucky native took the stage May 11. The crowd was sparse – you could walk to within ten feet of the stage without a problem – but its diversity read like an open book on Osborne’s critically-acclaimed major-label debut, Relish.

There were the pop fans, weaned on the radio friendly “one of Us;” the music fans attracted to the show by Osborne’s endearing spirit and warm, folkish charm; and those that fell in between, more than willing to bask in the glow of songs that aren’t motivated by anger and rage.

She fulfilled all their hopes, promising a rock n’ roll show to the younger fans in attendance, delivering a blues-rooted, gospel-inspired 90-minute set, and proving that there’s room in the new rock era for artists packed with soul, not vengeance. The material didn’t see much variation from the album, as Osborne pushed through Relish as if divinely inspired. As a vocalist, she charmed, passionately weaving pristine innocence within the crusty resin of a seasoned blues-veteran. She delivered “Help Me” with a muddy twang, softly caressed her was through “Crazy Baby,” and offered a Southern-fried graininess on “Pensacola.”

Notwithstanding her efforts, it would have taken an act of God to move the crowd, who barely flinched throughout the 15 song set and seemed undaunted by Osborne’s repeated attempts to spark energy. “Stand up and dance. This is a rock n’ roll show, not work. You’re allowed to have fun,” she urged before careening into the rough-and-tumble tones of “Help Me.”

The problem may lie in the misleading grandeur of “One of Us.” As the set’s closer, the song wasn’t Osborne at her best. Sweet and unassuming on the breakthrough single, the singer peaks when she isn’t acting pious and reflective, making the song as unreflective of her natural talents as the crowd’s unexcitable nature was of her abilities. Osborne shine when she lets the music flow through her. “One of Us” saw Osborne performing out of necessity, for the sake of the people who had been yelling the title since the opening notes of her performance.

In Osborne, there’s a powerful voice that can exhibit sexuality and spirituality in the same breath, giving material a multi-faceted radiance that is all but common in today’s angrier, self possessed performers. Where the Grammy winners are unleashing on stage, Osborne unfolds, and the result is refreshing.

If God were one of us, there’s no doubt he’d approve.