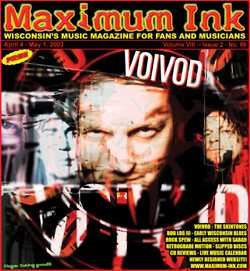 Voivod on the cover of Maximum Ink in April 2003

Voivod blasted thru the late 80’s and early 90’s with a unique and evolutionary stretch of conceptualized sci-fi progressive thrash metal albums. “Killing Technology,” “Dimension Hatross,” and “Nothingface” are all extremely influential and classic thrash-era albums.

Now after several years of difficult times, harsh realities and semi-obscurity, Voivod has returned, revamped and reenergized, sporting an impressive new band member, Jasonic (Jason Newsted formerly of Metallica). There is also an exciting spring tour with Sepultura and a summer tour with Ozzfest. In fact, it was Jason who performed much of the revamping. The incredible new album, “Voivod Voivod” was recorded at and released on Jason’s own Chophouse Records.

In tact on the band’s thirteenth album are Snake’s mesmerizing vocals, Piggy’s discordant guitar riffs, Away’s drum thunder, and now Jasonic’s pumping bass. So how did Voivod and Jason find each other? “That goes back a long way,” recalls Away, Voivod’s drummer and artistic visionary, in a recent phone interview. “When he joined Metallica in ‘87 and ‘88 was when we really started jamming together. We recorded some stuff in the 90’s under the name Tarrat. In the beginning of 2001, Piggy and I split Voivod, and Jason left Metallica. It was only a few months after that that we decided to give Snake a call and try to reform. We thought about Jason for the bass tracks. Jason was really excited about it and offered his help with production. Over the course of a year and a half we wrote the album. In Sept 2002 we started pre-production at Chophouse Studio and about Sept 27 Jason decided to join the band as a full time member. It was a very pleasant surprise.”

I had to wonder if the direction for the band changed since Jason stepped on board?

“Piggy wrote most of the music again, so it’s definitely Voivod.” notes Away. “I would say the biggest difference is that Jason is more stoner rock oriented. Very Black Sabbathish. Our first Voivod album, ‘War and Pain,’ was heavily influenced by Black Sabbath, so it’s kind of going back to the old school roots type of thing.”

So how does the new album compare with the older ones other than that?

“We tried to make it fresh,” emphasizes Away. “The specific nature we have is always there. No matter what kind of experiment we do, it’s always ends up being Piggy’s weird chords and my upside down beats and Snake’s Johnny Rotten [style] vocals. But then the new element is the heaviness of Jason’s bass playing. It’s like everybody has to sit a little more on his respective instrument instead of jumping all over, so we’re not showing off as much as in the past. For this album we have both technology and the money, so it’s definitely the best Voivod sound wise, and it’s my new favorite. It used to be ‘Killing Technology,’ but now it’s the new one.”

Should we be expecting anything new or different from the live show?

“We try to cover our career as much as possible, but it has become more difficult over the years. After 13 albums we can’t really cover every album. Our set list stretches over 20 years! With Sepultura we’re lucky enough to play an hour and 20 minutes. It’s going to be different on Ozzfest, although we were told recently that we could play 50 minutes, which is very good actually. I think we’ve got a good spot to be playing, right before the headliner on the second stage (Cradle of Filth). Then Jason can rest a little and jump on the main stage with Ozzy, because he’s gonna be playing with Ozzy also.”

On top of all these other projects, I read somewhere about a Voivod DVD in the works.

“We’re working on a whole bunch of DVD’s actually,” mentions Away. “There is one that we are working on right now for this new project. People should keep an eye on www.voivod.com regarding that, because it’s going to be sold thru the website.”