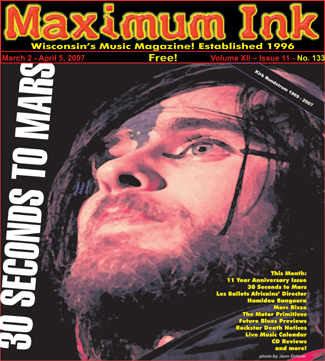 Escape. It’s why we crank the volume up to ungodly decibels when driving alone late at night. It’s why we have iTunes programmed onto every useless gadget that we lug around 24/7. It’s why we reach for the headphones, even when we’re about to pass out, just to listen to that song. Music is the lung of our spirit. It gives us a break from the Earth so we can breathe in the Milky Way. Four guys named Jared, Shannon, Tomo, and Matt are already there.

30 Seconds to Mars is a novelty of modern rock. Their self-titled 2002 album settled rumors that lead singer/guitarist, Jared Leto, was not some bored wash-up from Fight Club, but a multi-talented rock titan on the stage. With the blood-thirsty critics at bay, the group as a whole perfected their musicianship on 30STM’s sophomore album, A Beautiful Lie. The band does an impeccable job of keeping what their fans lovethe swirling, intricate guitar solos and a far-out rock vibewhile not shying away from deeper material.

“On the first record I created a world, then hid behind it,” Leto explicates. “With A Beautiful Lie, it was time to take a more personal and less cerebral approach. Although this record is still full of conceptual elements and thematic ideas it is ultimately much more wrapped around the heart than the head. It’s about brutal honesty, growth, change. It’s an incredibly intimate look into a life that is in the crossroads. A raw emotional journey. A story of life, love, death, pain, joy, and passion. Of what it is to be human.”

According to Leto, forty songs were written for A Beautiful Lie which was whittled down to the ten showstoppers that made the album. A wellspring of introspection, Leto’s writing is a global phenomenonliterally. Jared broke out the journal for A Beautiful Lie during the band’s premier tour, where he sat down to write in five countries on four continents, from NYC to the tip of South Africa. 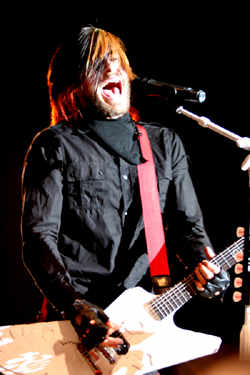 While explaining the painstaking process of making the band sound flawless with his lyrics, Leto recounts “I had worked on a song from Morocco to Thailand to L.A. and it always worked when I played it by myself on the acoustic guitar, but for some reason we couldn’t bring the song to life with the band, so I tossed it…Then one night I was sitting outside with my acoustic guitar and Josh Abraham walked out. As a joke I said very sarcastically, ‘Hey, you wanna hear a hit song?’ And, I started playing ‘Attack’ on the acoustic. After the first chorus, he stopped me and said, ‘That’s the best song you have. We have to record that.’ Now it’s our first single.”

A Beautiful Lie is an eclectic cauldron of Leto’s brewing dissatisfactions, dreams, and depressions. His vocals find the evocative core of songs like “Attack” and “From Yesterday,” which revel in their Pink Floyd glory. Guitarist Tomo Milicevic lets his thrashy, hard-edge riffs tear through the stratosphere, torching up the fretboard on the fan-favorite “The Kill.” Drummer and brother, Shannon Leto, is the spine of the album. Providing a thunderous backdrop of beats punched into all the right places. Shannon explains, “It was important for it to be emotionally accessible, and also stripped down and raw…we needed this record to sound really genuine and honest.”

”Change was an important theme for all of us this time around and a cycle that everyone goes through many times in their lives,” Leto explains. “I wanted each song to be like a chapter in a book. Together, they add up to make the story, but individually, every chapter has to have its own color, its own expression, its own personality.”

The celestial landscape painted by world’s loudest astronauts is a balance between virtual realities of the title track, to the reflective acoustic melodies of “A Modern Myth.” 30STM romanticizes on “The Fantasy” and crawls back into their dark corner on the despondent balled “The Story.” The album is an outpouring of passion that features an array of musical prowess unmatched by any of their contemporaries. So the next time you reach for the headphones, think about escaping to Mars—it’s only thirty seconds.