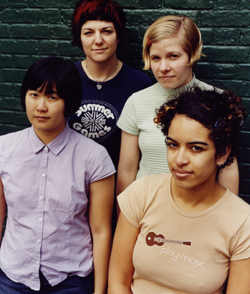 This year, one of the best CDs of all time, “2” by Portland’s All Girl Summer Fun Band, was released on K Records and in a great feat of resolve, I drove 140 miles, first stopping in San Francisco to pick up my friend Gray Six and then to San Jose to my cousin Dan ‘s place.  Dan then drove to Los Gatos, where at an all ages club nestled in a lush park in the Santa Cruz Mountains to see “The All Girl Summer Fun Band” who by all accounts was the best live band in the world that day.

Maximum Ink: How did the band start?
Kim: During the summer of 1998, I asked each of the girls if they wanted to play in an all-girl-summer-fun-band. None of them had ever met before. I knew them all separately and I thought it would be fun to get them all together to play. It was just going to be for the summer. We ended up having so much fun playing together that we decided we would keep on playing.
Kathy: Yeah, one day Kim told me, “Oh, you’re in a new band.” And I was like, “Okay.”

MI: Has Jason Lee heard Jason Lee?
Jen: Actually, yes. He and his fiancee thought it was very flattering.

MI: Who are your main musical influences?
Kim: I have listened to music all of my life, so I have many influences. However, if I had to pick 3 I would say The Beatles, The Pixies , and Tiger Trap.
Kathy: My musical influences are always changing, so whenever someone asks me this question, the answer is always different in some way. Thinking of some of the bands I’ve listenened to the most over the years (past and present), I’d have to say - many friends and local musicians (Hutch Harris, Kim Baxter, Jen Sbragia, Rose Melberg), Tiger Trap, Green Day, Bikini Kill, Dinosaur Jr., Nirvana , Blake Babies, Elevator to Hell, The Beatles, Neutral Milk Hotel, Guided By Voices - to name a few.
Jen: I have always loved music one can sing along to, except for a long period growing up where I was into speed metal. But at first It was the Carpenters and the Grease Soundtrack. These days I’m listening to a lot of old soul. I also love power pop or whatever you would call it- the Fastbacks , Visqueen, the Ramones.
Ari: I am mostly influenced by musicians around me. Practically everybody that I know has been or is in a band and we all seem to support and influence each other.

MI: Who are your visual influences?
Kim: My brother, Todd Baxter , is a great artist and I’ve always admired his work. I am also a big fan of pop art. I love when artists combine pop art and politics. My 2 favorite artists that do this are the Russian artist, Erik Bulatov, and Barbara Kruger.
Kathy: I like all kinds of art and artists. Like music, I’m inspired by what my friends make and by what’s happening locally. I’m also very inspired by 60’s and 70’s graphic design (fabrics, magazines, anything) and by Japanese graphic design in the vein of Sanrio.
Jen: I am drawn to graphically bold things. I like the dutch design. Consruction paper cut out stuff, spray paint stencils. I love those.

MI: Do you find it hard to be taken serious by guy bands?
Kim: No. Female musicians, at least in our town, are given just as much respect as male musicians. I know thatís not the case everywhere though.
Kathy: For the most part, no. I usually don’t give a rip anyway, so I’m not paying attention to that. There are plenty of all-guy bands I don’t take seriously.
Jen: Yeah, amen to that. I used to try so hard to play guitar really well when I was a metal girl. You have to try so hard to prove yourself. What a waste of time. Who cares? I’m confident, we are all great songwriters and musicians, so not being taken seriously doesn’t phase me.

Kathy: Yeah, I guess we are in a “scene” that loves girl musicians, but there are plenty of genres (like heavy metal) that are still very male dominated.
Ari: No. Because we could kick all their asses.

MI: Tell me about the Rock & Roll Summer Day Camp?
Kim: The Rock and Roll Camp for Girls here in Portland started 3 years ago. It is a camp for girls ages 8-18. The girls pick an instrument they would like to learn and during the week they have instrument instruction along with other workshops such as self defense, song writing, recording, putting on shows, making a zine, etc. It is a wonderful camp! The girls put together bands and at the end of the week they play a show. I have been teaching beginning guitar there. It is so much fun! They just added an after-school program. I hope it continues to grow and grow! Hopefully it will be offered outside of Portland sometime soon!

MI: Do you own a Grizzly Bear?
Kim: Doesn’t everyone?
Jen: Oh, mine’s actually a Polar bear.
Ari: No. But I do have a bear that I have had since I was five.
Kathy: Ari’s my grizzly bear.

MI: How about a Puppy dog?
Kim: Yes. A very cute one!
Jen: No, my landlady would kick me out.
Ari: Sort of. I have a beagle and she will be seven in October but she’s still a puppy to me.
Kathy: Kim’s my puppy dog.

MI: How did you end up in Portland?
Kim: I went to bed one night at my parentsí house, and when I woke up, I was in a cold, dark basement tunnel. There was a big pile of shoes in the corner. I was put on a big ship and forced to paddle day in and day out. The next thing I knew, I was in Portland, Oregon. Then I met Kathy, Jen, and Ari and we decided to start a band.
Kathy: Hey, were there any CUTE shoes in that pile? Well, I moved to Portland, Maine at first. Then I was like, “Waaaaait a minute, the Portland I want is on the OTHER side.” So then I walked over.
Jen: I was drawn here by a flashing beacon- a bright light. And when I got here I realized it was just the White Stag sign.
Ari: My bf moved to Portland.

MI: What do you like best about touring?
Kim: Spending time with my best friends on the road. Having days off and going to a movie together. Going on late night walks. Going shopping. Meeting new people. Oh yeah, and playing shows.
Kathy: The long drives, thinking, seeing the landscape, taking pictures, seeing new people, doing something fun in a new place on a day off, making people happy with music. Oh yeah, and the sex and drugs are good too.
Jen: I like photographing strange signage and things that are not at home. I like to look for interesting graffiti. I like staying in motels. I like seeing people you care about that you never get to see usually. And I love it when that one older drunk guy comes up after the show and tells me what an amazing guitar player I am. Well, as long as its not creepy.
Ari: Meeting new people and traveling to new places.

MI: What do you like least about touring?
Kim: I miss my boyfriend and my dog.
Kathy: It’s hard to eat healthy on tour. There really needs to be some healthy fast food! And not being able to do your own thing is hard at times.
Jen: I miss my dude, and I really hate the thing where you are always digging through your bag. Clothing bag. Toiletry bag. Always digging! Hate living out of a bag. Digging digging for that thing thats always on the bottom.
Ari: Driving eight hours and playing two shows in one night.
Kathy: And let’s just say, for the long drives we stay away from Mexican food, if you know what I mean (Ari, I’m looking in your direction).

MI: How did the Gus Van Sant photo shoot happen?
Kim: It was supposed to be for Interview Magazine, but they never printed the interview. Oh well. It was fun spending the day with Gus! He is so cool!
Kathy: Yeah, it was a good excuse to meet GVS !
Jen: At first the magazine wanted a stylist there and wardrobe and we were kinda nervous. Then it turned into Us and Gus just around town, with us in our everyday clothes. Thank god. Although I still wonder what kind of clothes they would have had for us.

MI: Jen is a guitar goddess, who are your influences?
Jen: Kim Baxter . She is the best guitarist in the world. She taught me everything I know. Before I met her I didnít know the difference between a flanger and a banjo. Now look at me! I totally rock! Thanks Kim.
Kim: Youíre welcome Jen.

MI: What is in your CD player right now?
Kim: Let me go check: Life at These Speeds , The Shins, and Joan of Arc.
Kathy: Kremlin Bronx (a Portland band from a few years ago)
Jen: Let me look and see…awwww! It’s the Thermals ! Yeah Kathy Rules!
Ari: The new Shins record.
Kathy: Damn! I wanna hear that.

MI: What is your favorite “ever” TV shows?
Kim: When I was younger I loved “The Cosby Show ” and “Family Ties”. My family would always watch those shows together. Right now I love “The Gilmore Girls “.
Kathy: Sesame Street , My So Called Life, Twin Peaks, Friends, That 70’s Show, Mr. Show, The Simpsons.
Jen: I used to love the Donny and Marie show, but I have moved on to heinous crime programs.
Ari: Cosby Show

MI: Has Jen ever shared Becky?
Kim: Not with me.
Kathy: Well see, she didn’t want to share Becky , she wanted to share Becky’s boyfriend. And um, I’m not able to divulge that information.
Jen: yeah, I don’t think you’re hearing the song right, dude. No, I never got my hands on Becky’s boyfriend, which, in hindsight is a good thing. I gave up on it and then I met my husband.
Ari: I don’t think so but I have shared Jen.