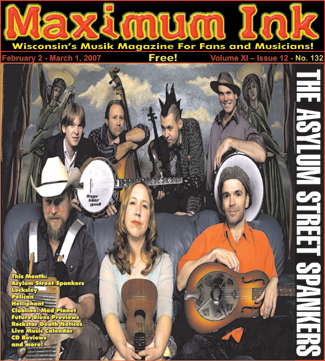 Asylum Street Spankers on the cover of Maximum Ink February 2007

The Asylum Street Spankers started as a side-project during a hallucinogen and liquor-soaked party at the Dobbs Hotel in Llano, Texas, in 1994. It was there that singer Christina Marrs and guitarist Guy Forsythe met Wammo, a slam poet who also plays washboard and harmonica. After a night of singing and playing on the banks of the Llano River, they decided to keep the spirit of the chance meeting going. They returned to Austin to start their journey.

The trio gathered friends and similar-minded musicians while hustling free shows on the Guadalupe Street Drag, which is called Asylum Street because it leads to the state hospital. Consequently, a “Spanker” is an acoustic musician who can play an instrument proficiently and vigorously. They amalgamate Vaudeville with bluegrass, country-blues, punk rock, and Tin-Pan Alley, which was the name given to an group of New York City songwriters and music publishers that dominated American pop music in the late 1800s and early 1900s.

Forsythe left in 1998 to work on his solo project, while Marrs and Wammo took the helm, infusing the band with their punk-rock ethos. They formed Spanks-A-Lot Records in 1999, and have built a serious following in Japan and Europe. They play depending on their mood, and transition seamlessly onstage from Hank Williams to Howlin’ Wolf, doing 180-degree drop-of-the-hat changes at a moments notice. The Asylum Street Spankers are building a worldwide presence as one of the planet’s distinct and totally unique acts.

Wammo is an interesting character. A self-described “Cultural instigator, poetic provocateur, irresponsible drunk, rock musician, DJ and lover of ladies,” the eclectic vocalist and Spanker mastermind phoned in from Austin to talk with Maximum Ink about new record “Mommy Says No!” and his work as producer, arranger and composer for a group that simply cannot be classified by genre.

MAXIMUM INK: Tell Me about Asylum Steet Spankers. How did this come to be?
WAMMO: It’s a side project, and its fun, and it has snowballed into something much bigger. It has consumed our lives, and it’s become everybody’s day job.

MI: Tell me about the Tin-Pan Alley stuff, and your love for all these different styles of music.
W: It’s tough to actually nail down tin-pan alley. My influence from that era comes from stride piano and old blues. Folks like Fats Waller and Willie Smith are my big influences on stride. I like a lot of old rural blues guys like Sonny Terry and Brownie McGhee, Lightnin’ Hopkins, which are more contemporary, but to me, they still play in that same old style. Someone else who is badass is Skip James. I’ve heard his piano recordings - It’s amazing how different James’ piano was from his guitar music. The piano stuff was always more upbeat.

MI: Tell me about “Mercurial,” the live recording you put out last year.
W: Let me just lay it on you. Mercurial was a record of all cover songs with the exception of one original “Hick Hop.” It comes from “Faster Than the Speed of Suck,” my solo record, so the Spankers are covering one of my songs. There was no thought behind a collection of this or a collection of that. It was all the orphan songs that made it onto a record.

MI: So your influences are really out there…
W: I listen to everything from Bach to the Butthole Surfers. A lot of metal and punk rock, too. Right now, in my wife’s car, I have been listening to Judas Priest, Rod Stewart, The Cars, Hank Williams, Lucky Frizell, and The Art Ensemble of Chicago. It depends on what mood I’m in.

MI: Is it kind of like a Looney Tunes thing? Where it has a meaning for old people and a separate meaning for the kids?
W: Exactly! That’s exactly what it is. We went to the old Warner Brothers cartoons, to check them out, and there was slapstick and visuals for kids, and also jokes for adults that go over their heads. You’re the first member of the press that didn’t need it explained to them! Children’s music is usually pretty sucky. Some of it is completely inane, and kids will listen to the same song hundreds of times. We wanted to construct a record that will stand up to extensive repeat playing.

MI: And especially with being able to actually incorporate the Tin-Pan Alley and Vaudeville, two bars of “Sweet Jane” by the Velvet Underground, and throwing it over Bluegrass with three-part harmonies. You’re exposing kids to a lot of interesting music with this record. There is a lot of stuff for them to differentiate from.
W: It’s great! I wrote a child’s first hardcore song! “Mommy Says No!”

MI: Do you have anything to say to our readers to help them brave the winter until you get here?
W: Just remember that a bowl of ice cream will warm you up better than a hot cup of coffee.