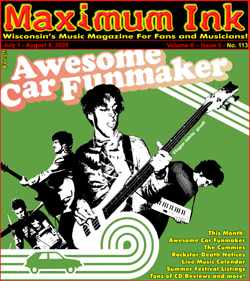 Madison's Awesome Car Funmaker on the Cover
photo by Rokker

Appealing and unpredictable, the high-energy rock n’ roll of Madison’s Awesome Car Funmaker is just plain infections. They recently celebrated their two-year anniversary, a feat in this modern age of bands.

ACF’s influences, which range from Queen and These Arms Are Snakes to 60’s soul music, are witnessed throughout their manic stage show that features the band dressed in quasi-Mod, loudly colored suits. Fueled by bassist Justin’s spastic pogoing and lead singer/guitarist Ryan’s over-the-top guitar hero posturing, Awesome Car Funmaker engage the audience with moments that range from the gorgeously saccharine sing-a-long tune, “Part Two,” one of the band’s current favorites to play, and the bombastic, metallic stomp of “Torture Chamber,” to the ridiculous cover of Journey’s epic “Separate Ways (Worlds Apart).”

Brendan goes on to describe the communal, friendly vibe of an Awesome Car Funmaker (a name they mish-mashed together one night in a group effort) show. ”It’s a social outing every time we have a show. It’s more like hanging out with friends and playing music rather than a formal concert.”

ACF recently finished their next record, the follow-up to 2004’s Green Means Go, but are waiting to let the freshman disc sink in before unleashing the new stuff. Up next for them is taking the show on the road, exploring outside of the Madison venues where they’ve cut their teeth over the past two years and plan to take off on a 10-city tour before the end of the summer. Hooky, hip, and hilariously self-reflexive, Awesome Car Funmaker will make excellent ambassadors to the rest of the country.

Catch Awesome Car Funmaker at the Maximum Ink/Berghoff Rockstage at the Atwood Summerfest in Madison, Wisconsin on August 6th with the Gomers, Y-Slim, the Bar Tabbies, the Motorprimitives and Magic 7.

The 23rd Atwood Summerfest takes place on the same block of Atwood as the Barrymore Theatre. Magic 7, featuring Buddo and Paul Schluter of Last Crack will be making a rare appearance at this year’s event since breaking up in 1998.

Madison’s legendary Tar Babies live on through Bucky Pope and his band the Bar Tabbies, which feature two thirds of the Tar Babies.

The legendary lounge-lizards The Repile Palace Orchestra will provide the cultural side of things with their version of Balkan Lounge Music.