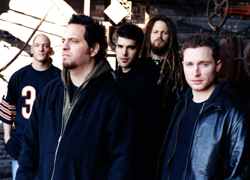 It takes a special kind of band to attract the attention of Mudvayne frontman Chad Gray. That band is bloodsimple.

“People are going to be blindsided by this record, and I can say that with confidence. I think this is my greatest work,” says frontman Tim Williams, who along with guitarist Mike Kennedy, spawned bloodsimple from the ashes of their acclaimed metal-core outfit Vision Of Disorder. While VOD were visionaries on the heavy music front, bloodsimple offered the pair an opportunity to stretch their musical muscles, further expanding their hard-hitting dynamics from sheer aggression and amplified rage, to subtle soundscapes that stress their uninhibited extremes.

“Tim and I had talked about doing this type of project for awhile, and when VOD came to an end, we realized that this didn’t have to be a project, it could be a band,” says Kennedy. The duo began collaborating on bloodsimple in late 2001, but it wasn’t until the addition of guitarist Nick Rowe nearly a year later that, according to Kennedy, “we really took off. That’s when we really started writing three-dimensional songs.”

Rowe, a classically trained musician with rock roots and more than a decade of jazz schooling, was sharpening his teeth as a producer when a mutual friend introduced him to the VOD veterans. “I knew nothing about them or their band when I first met them, and I think that was kind of good,” says Rhodes. “No one knew what to expect, and it naturally worked itself out. When we met, we met in the middle, and the middle turned out to be something interesting.”

The results intrigued Gray, as well, who signed the band as the first artist on his Bullygoat Records imprint on Warner Bros. Records. “bloodsimple opened for Mudvayne in Philadelphia, and it didn’t take long for me to understand that they have the songs, energy, ability and live performance needed to captivate an audience,” says Gray. While plans for spring include bloodsimple joining Mudvayne on the road, in the meantime, they’ll be joining Otep on their Alliance Of Defiance tour February 18, a cross-country package also featuring American Headcharge, Candiria, Dry Kill Logic and The Autumn Offering. The band’s debut, A Cruel World, is scheduled for a March 29 release.

“Half of this album is brutal, and the other half… You don’t even know where it’s coming from, yet it’s all a part of the same album,” says bassist Kyle Sanders, whose previous credits include the industrial-metal trailblazers Skrew, as well as a more recent tenure with Medication. “The dynamics of this band are just unreal. It never feels like it’s too fast or too slow, but there’s still a range that goes from one extreme to the other, without ever compromising either.”

Opening track “Straight Hate” swings like a sledgehammer with blinding fury, while its album-closing bookend, “Plunder,” sweeps the senses with a peaceful bidding and subdued calm. “Blood In Blood Out” is a soul-searing blitzkrieg of sensory overload, “The Leave Me Song” takes a soul-searching sonic step back, while “Sell Me Out” offers a melody-infused medium, offering the keenest insight into a band that isn’t afraid to nurse the wounds they so readily inflict.

“This is the band I’ve always wanted to be in,” echoes drummer Chris Hamilton, a former touring member of Downset and Medication who’s also recorded for such scalding acts as Crisis and My Ruin. “bloodsimple is a collective, and everybody brings something really strong to the table, there’s no weak link in this band. Most of us have done this before as a profession, and we wanted this one to be the real one for the long haul.”

More than anything, says Kennedy, “bloodsimple is inspired by musical freedom.”

“I love straight-up heavy bands, but that’s not what we’re doing,” agrees the frontman. “I love to sing, and I love to scream, and the older you get, the more influences you have. We want to take listeners on a journey, and we sequenced the album that way. It takes you from the gate and smashes you in the head, but then it takes you to a different place. We didn’t want to run with the pack. We knew that bloodsimple would never be like other bands.”