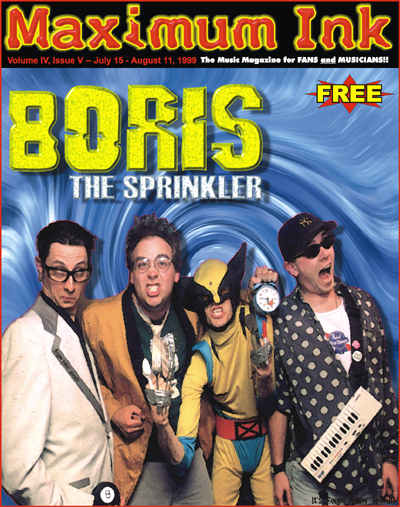 Green Bay's Other Hero's: Boris The Sprinkler, on the cover of Maximum Ink in July 1999

When you think of Green Bay, there is only one thing that comes to mind, it’s the hometown of that zany punk rock band, Boris the Sprinkler. These Pop Culture abnormalities are so endeared in their hometown that the mayor has proposed to change the name of their obscure football team to “The Green Bay Sprinklers” and the name of the stadium to “Reverend Norb Field.”  Who the hell is Reverend Norb and Boris the Sprinkler, you may ask?  Well sit down, pop a beer, light a cigarette and read on, but I must warn you that after you’re done reading this article, you may know less about the Pride of Green Bay than before you picked up this paper. Formed by vocalist and former writer for Maximum Rock and Roll, (not to be confused with Maximum Ink – the paper in your hands) Reverend Norb, super guitarist Paul #1 and a revolving door rhythm section in 1992.  They were and still are influenced by the more zany side of punk rock music, The Dickies, Rezillos and The Ramones.  “Every talentless idiot like me,” confided Reverend Norb, “learned how to play music by listening to The Ramones.”

They released an uncountable number of 45’s, split 45’s, EP’s, LP’s and CD’s, [Although, research put the number at 6 full-length albums and 19 singles].  “For awhile there,” said Mike Sykes, former owner of Milwaukee’s Stinky Record Exchange, “it seemed like Boris the Sprinkler were releasing a record every week.  I couldn’t keep up and had to dedicate the entire store to them.  I went out of business one month later.”

Their sixth full-length release, Suck is quite possibly the best rock and roll album of the 90’s. The songs are loud, fast, and snotty. Its lyrics are full of humor and pop culture references.  With nary a song over two zinutes, so they aren’t long enough to get sick of. The record opens with the irrepressible frontman Reverend Norb, doing a “DJ on crank schtick,” only to be demoted to introducing the songs by guitarist Paul #1.  The band then blast off for twenty-seven (actually fifty-four, because the CD is repeated without Reverend Norb’s introductions) minutes of rollicking rock and roll, that’s bigger than big, stronger than strong, faster than fast, righter than wrong. “Statutory Rock” accelerates into a nitro-fueled injected hot rod of a song that reminds me of driving one-hundred and forty miles an hour on Highway Twelve to Baraboo in a thunderstorm during harvest time, in a stolen Corvette.  My Radio Is Telling Me to Kill (The Guys on My Radio)” and"Dirty Candy” are both sure fire rock hits, that will find little or no chance of getting any airplay.  If “Icky Shazam” were released in 1969, it would have been a Top Ten Bubble Gum hit.  “Purple Vulcan Hot Rod” is quite possibly the finest rock ode to a motor vehicle since Queen’s “I’m In Love With My Car.”  “We have never and probably never will perform that song live,” lamented Reverend Norb.  “Because it’s too hard to sing.  I’d like to someday hear that song on Sesame Street sung by Oscar the Grouch.”

But Boris the Sprinkler just doesn’t write and perform goofy, zany, fast punk songs that stick to you like gum on your shoes at a bus stop.  There are some sensitive moments on this CD.  Songs like “Jonestown Judy,” “Your Stupid Pants,” “Got2Fuc2Day,” and “Baby I Got Gas” tug at your heartstrings and will put a tear in your eye.

Although they are bonafide Rock Stars, having landed a recording contract with the prestigious Go Kart Label, the members of Boris the Sprinkler haven’t quit their day jobs.  Refusing to perform no farther than 560 miles from Green Bay, unless the shows are planned within their scheduled vacation times.  “We have a very, very realistic view of being a rock musician,” said the rubber faced singer, Reverend Norb.  “It’s fun as a hobby, but I don’t think it would be that great of a job, especially being old geezers like we are.”

In a few months football season will be among us, so when you’re watching the Green Bay Sprinklers kicking the crap out of the Minnesota Paisley’s, remember the pride of Green Bay, Boris the Sprinkler.