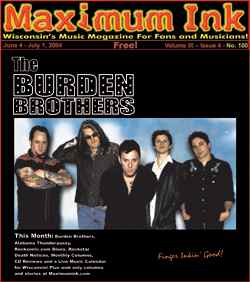 Burden Brothers on the cover of Maximum Ink in June, 2004

I ran into the Burden Brothers completely on accident at this year’s South By Southwest festival in Austin, Texas. Their crowd was as big as their sound and I was totally impressed with the songwriting, performance and energy they put out. They played together like a pro sports team, well honed. I spoke with Cory Rozzoni who left Madison to relocate in Dallas.

Maximum Ink: Tell me of your backround with the defunct Rockford/Madison band LE SONIC.
Cory Rozzoni: “I joined Le Sonic after knowing the guys for a long time. We all came up in Rockford, Illinois. Guitarist Ted Jacoby (now in 420), the other guitar player in Le Sonic, used to be in a band called For Christ Sake. I played in a band called Motormouth with the old singer from For Christ Sake. Everyone just new each other and we kind of ended up in the same bands. We played around the Madison scene, released an EP and then we decided to move to Dallas, Texas on the urging of a close friend of ours who worked for Sony Records in Dallas. We moved and things didn’t quite pan out the way we planned and 4 years later I’m playing with the Burden Brothers. What do ya know?”

MI: Tell me how you got into the Burden Brothers? How did you know these guys?
CR: “I was a fan of their previous bands and was just in the right place at the right time. I used to go to BBQ’s and parties over at Casey Orr’s place. Their guitarist was planning on leaving and Casey Orr’s wife actually suggested me. They called, I auditioned, I got the gig and within a month or two we had our record deal and were in the studio laying down the tracks for the CD. A month after that, the CD was out and we’ve been on the road ever since.”

MI: Tell me about the band. It’s the singer from the Toadies, drummer from Reverend Horton Heat and bassist from Gwar right? Any other tidbits about them…facts I can spew?
CR: “The Burden Brothers are Vaden Todd Lewis (ex-Toadies singer), Taz Bentley (ex-Reverend Horton Heat, Tenderloin, Izzy Stradlin drummer), Casey Orr (ex-GWAR, Ministry bassist) plus Casey Hess and I on guitars. Vaden and Taz started the band about 2 or 3 years ago after their previous bands had split. They were tired of the biz and just decided to have fun. They had a rotating cast of musicians and wrote and recorded some songs. Friends and family loved it, so they decided to take it to the next level and solidify the lineup and get it out there to for the rest of the world to hear. That’s where the rest of us come in. The band is truly a brotherhood at this point. We’ve all been through the ringer many times. We all want the same things and have the same goals and drive. We have great chemistry and mutual respect. It’s a blast everytime we get onstage. There’s a certain magic that happens onstage and in the studio, between the five of us, that only happens once, maybe twice if you’re lucky, in your career. Our number 1 goal every night is to get up on the stage and kick your ass with some good old rock ‘n’ roll!!! Or, as we like to say, RYFOLAMF (ROCK YOUR FACE OFF LIKE A MOTHERFUCKER)”

MI: Where do you live now? Dallas, correct?
CR: “I’ve been in Dallas for 5 years now. The scene is amazing. There is an area in town called Deep Ellum; it’s three blocks wide and ten blocks long and every rock club is in that area. It’s a very close-knit musical community. Not quite as cut-throat as what I remember the Midwest being…Plus the girls are pretty and the weather ain’t bad either.”

MI: Any other cool shit that people would want to know, that I don’t?
CI: “We have a video for “Beautiful Night” that we just completed and we also have a Live DVD, coming out in June/July, that we filmed in front of 1200 of our closest friends in Dallas. You can check out all kinds of good stuff about us at www.theburdenbrothers.com.”