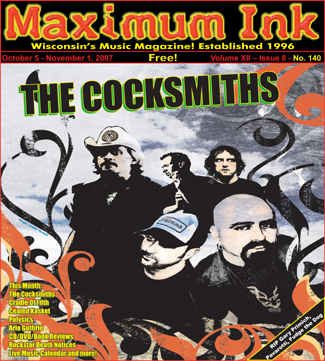 Milwaukee's The Cocksmiths on the cover of Maximum Ink October 2007

Keith Richards once said, “Rock n’ roll… It’s in the bones!” Enter the Cocksmiths, Milwaukee’s home-grown testament to Captain Keef’s immortal words. The Cocksmiths’ premier album, “Trouble Pill,” is due out Oct. 13 and features a brutal blend of Americana rock.

Comprised of seasoned Milwaukee musicians, the Cocksmiths consist of frontman and rhythm guitarist Ryan Daniels, co-vocalist and rhythm guitarist Matty Gonzalez, bassist Joey Carini, lead and rhythm guitarist Paris Ortiz, and drummer Dave Schoepke. “It started with me and a former member having conversations about putting together a band, primarily consisting of a bunch of our friends to play some ridiculously loud rock,” said Daniels. “Eventually we did it, and found that it was the most fun we had in a long time. Many of the original guys were all in previous commitments so it never materialized with them. Matty and I continued to look for the guys to fill those shoes, and now we have.”

Psychadelicasi and Big Dumb Dick veteran Ortiz joined the lineup in November of 2004, when the Cocksmiths officially recorded “Trouble Pill.” Revolving members pushed the wavering release back three years, where the group has currently found its long-sought stability in bassist Carini and drummer Schoepke. “What they bring to our ranks cannot be described in words, you have to see and hear to understand why Matty, Ryan, and I are so excited and enthusiastic for what the future holds. This band is downright scary,” said Ortiz.

He may have a point. Contemporaries in the rock arena are turning to synthesizers and other technological alternatives to enhance a band’s sound. The Cocksmiths took an edgier route. A ‘wall of guitars,’ is how the Cocksmiths refer to their rare three-man axe team. “It was my idea,” Daniels said, “again, getting back to texturing and dynamics; we try to push and pull with all the instruments so you’re not getting inundated with all of them. There are times when we let all the guitars though, but only if the moment calls for it.”

Adds Ortiz, “The ‘wall of three guitars’ was already established by the time I came around, and I wasn’t aware of it when I showed up for the first practice. If I had known ahead of time I probably would have thought it was bad idea. I probably would have thought it would be too muddy, but Matty, Ryan, and I play so differently, it’s hard to even notice. We may play the same riff, but we’ll play on different neck positions and when I add the color or take a lead it sounds full. To be honest, I don’t know how we pull it off.”

According to Daniels, the songwriting for the album came just as naturally as sonically piecing together the guitar parts. “A lot of the songs wrote themselves. It was the first time working with some of these guys, so you can hear a lot of our influences. It is also raw; the album is a reflection of us testing the waters of the writing process. I think it’s a great start, and it will only mature as we write more. The more we become acclimated with working together, the more our defined our music will be.”

Ortiz agreed that the writing process was surprisingly organic for a miscellany of artists, each with their own musical pasts. “The primary songwriter of a certain riff will play and the other members will follow and add their own parts; if it is appropriate and the new addition compliments the song, we keep it - if not, it’s tossed out. The song is what’s important. Ego takes a back seat. It is a relatively quick process for us. I remember ‘Black Widow’ and ‘Bar Room’ were written at my very first rehearsal.”

“I’ve always looked at writing as a 90/10 thing,” explains Daniels. “What I mean, is that 90% of writing is actually observing and becoming submissive to your senses. The rest is actually applying it. I always like to tell a story, whether it’s personal or based on observation, and I think I’m personally still in the early stages of that. When I write, I try to bridge the heavy with the melodic and dynamic. I love really strong, compelling rhythms and using volume and texture to create dynamics. It usually starts as a line in my head that I start humming, and before I know it, I have the majority of the song structure in my head before I even pick up an instrument. I sort of keep it in my head as I go about my day and I use it as sort of a soundtrack for what I see happening around or within me. Based on how the song feels, I’ll start free writing things that seem to fit the song, which eventually materialize to a theme of some sort. I do the actual writing last.”

“Trouble Pill” follows suit with a sterling example of American rock: honesty and quality, drizzled in gut-gauging blues. On tracks “Mutha Trucka” and “Twisted Wrist,” drums circulate the beat while ‘the wall’ serves a bitch’s brew of cascading thunderbolts of melody.

“This is the perfect time in my life to be in a band,” sums Ortiz. “I have experienced so much during my career that I found myself in a place where I wanted things on my terms. No settling. I wanted to be in a band comprised of serious, talented musicians who at the end of the day I can call my friends, and I found that. We’re not following any trends. We’re just writing what we feel is good music and giving 150% when we hit the stage. Those two hours that we are on stage mean everything to me.”