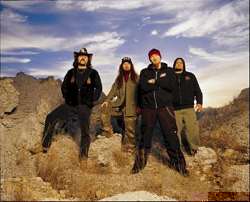 What do you do when your world-famous band suddenly breaks up? How do you respond to the fan with a question mark in his head and a “Pantera” tattoo across his chest? If you’re Vinnie Paul or Dimebag Darrell you forge a “Damageplan,” the new band featuring the x-Pantera brothers.

Phil Anselmo, the other key element from Pantera, left to pursue solo projects and is on tour with his new band “Superjoint Ritual.” Phil also has another project, “Down,” that also features x-Pantera bassist Rex Brown. The split down the middle of the band played itself out in the media; it wasn’t pretty.

It was a year sorting things out before the brothers decided it was time to write new songs and unleash their new found power. “It’s as heavy as Pantera ever was,” explains Vinnie, “Maybe heavier! It can be melodic and deep as it can extreme!” When asked what separated his new band from the old one, Vinnie replied immediately, “Diversity.”

Dime’s answer to that question comes in true Dimebag fashion, “What kind of fucking ass kickin’ do you want? Right in the nose? One in the gut, maybe? Or, how ‘bout the Chinese fuckin’ water torture?” The brothers are never ones to hold back. A message on their website to fans talks about their “great fuckin’ time” in Japan. Also available on the website are archived web casts and candid interviews from their tour bus and the Tower Records signing of “New Found Power” in Dallas, TX among others.

“New Found Power,” released in February Elektra Records, features x-Halford and Diesel Machine guitarist Patrick Lachman on vocals. “We new we were going to have to get a kick ass vocalist,” proclaim Vinnie and Dime, both hardcore Judas Priest fans who never looked back after hearing Lachman’s vocals in their music. When the new singer was asked if he will be playing any guitar on stage he jokingly admits, “I’m not that coordinated.”

Lachman views Damageplan as a natural progression of the nucleus that made Pantera a legend in the first place. “Comparisons are going to come because it’s the evolution of a legacy, even though we’re not trying to be Pantera,” states Lachman, “we’re trying to evolve and do something different.”

Bassist Bob Zilla came to know the brothers as a friend and as their tattoo artist. “When I got the call I was honored,” explains Zilla, “I couldn’t ask for a more killer opportunity. Not only were these guys such a great influence on me musically, but they’re also my friends, and guys I get totally boozed up with. Something like this only happens to a person once, if ever, in their career.”

Damageplan is back in the states and are currently on the MTV2 Headbanger’s Ball Tour with Drowning Pool and Hatebreed. That tour will hit the House Of Blues in Chicago on April 7th, the Rave in Milwaukee on April 9th and the Quest Club in Minneapolis on April 13th.

Dime and Vinnie love playing in Wisconsin so I asked them what their favorite bars are to hang-out at while on stage. Vinnie had no problem shooting out The Body Shop in Green Bay and Hooter’s in Madison. He also made sure to tell me “If y’all are in Dallas, stop by my stripclub, The Clubhouse.” It is on the web at www.theclubhousedallas.com.