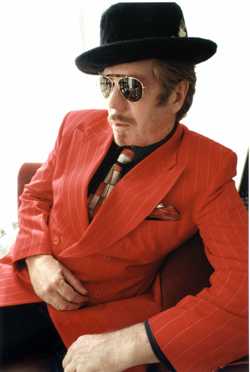 Dan Hicks & the Hot Licks in Maximum Ink in December 2007

Dan Hicks has been performing an eclectic mix of staccato, alt-jazz guitar over the brushed swagger of his swing band The Hot Licks for over 30 years. Based in the San Francisco Bay Area, Hicks has just released “Duets,” a download-only album featuring collaborations with Tom Waits, Bette Midler, Willie Nelson, and Rickie Lee Jones. Hicks spoke with Maximum Ink about the new incarnation of The Hot Licks, his first band The Charlatans, and working with filmmaker Ralph Bakshi.

MAXIMUM INK: Tell me about your new release “Duets.”
DAN HICKS: It’s a record strictly for download. I came up with the idea in 2001 or 2002, when I was recording for SurfDog Records. It came together with Tom Waits, Bette Midler, Rickie Lee Jones, and Willie [Nelson]. I’m not really concerned that it is an internet-only release. I don’t have a computer, but it brings my name around again. I made this record very personal, I just called everybody up and sent them some tapes. My favorite collaboration was with Tom Waits, we went to Sonoma and cut the track at a little recording studio. I was in awe of his presence. I met him once in the early 1970s and have been a fan of his music ever since.

MI: So who are the players in the new version of the Hot Licks?
DH: It’s an all-new group of people. They are all Bay Area musicians. We have Darla and Roberta on back-up vocals and percussion, Paul Smith on bass, Dave Bell on guitar, and Richard Chon on Violin. We go on short trips now, no more than a week or two. It’s hard enough as it is, but the Midwest tour will be great. We’re playing at the Old Town School of Folk Music in Chicago, The High Noon Saloon in Madison, and then in Ann Arbor, Michigan.

MI: Did you have a musical upbringing?
DH: I was an only child. My uncle played the fiddle, mainly Country-Western music, and my parents listened to straight pop, like Lawrence Welk. I discovered Jazz, Swing and Dixieland when I was in junior high. I started out as a drummer, and got my first snare when I was in sixth grade. I got a full set at 14, when my family moved to Santa Rosa, and I still have a set of drums that I play. I hadn’t really sung until I turned 19, when a friend of mine had a guitar and the folk craze was hitting big. It took awhile to get the singing thing together, because I was untrained and used to jazz drumming in coffeehouses.

MI: You were the drummer for the The Charlatans. Tell me about the group, and the recent reunion show in San Francisco for the 40th Anniversary of the Summer Of Love.
DH: We got together a few months before the show and started rehearsing. I joined The Charlatans right out of college, and they were a typical long-haired rock band from Haight-Ashbury. We have gotten together off-and-on over the years, and it’s always a cool and amiable experience.

MI: Tell me about your work with Ralph Bakshi, on the film “Hey Good Lookin’.”
DH: I had broken up the Hot Licks and Bakshi was in LA, working on “Hey Good Lookin’.” It was a cartoon with some live-action set in Brooklyn, where he had grown up in the 1950’s. I came up with some tunes and recorded them. I guess someone was displeased because the money ran out, and the only time I ever saw the film was in a video store in the times of Betamax. I still had the music, which was never released with the film, so I put the album out anyway.

MI: What can the fans expect from Dan Hicks and the Hot Licks this time around?
DH: We’ve got a great show. Around this time of year we also play Christmas tunes, and have a Christmas album in the works. The folks who come to see us in December will get a good taste of that.

Dan Hicks shuffles through the Midwest Dec. 6 in Ann Arbor, MI, at The Ark, Dec. 7 in Lafayette, IN, at the Lafayette Brewing CO., Dec. 8 in Chicago, at the Old Town School of Folk Music, and Dec. 9 in Madison, WI, at the High Noon Saloon.