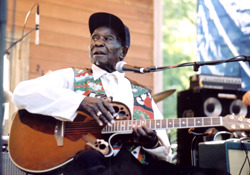 “I’ve got a good mind; I don’t forget nothing, you know?” That understated self-assessment by David “Honeyboy” Edwards is characteristic of the 88-year-old blues guitarist, vocalist, and songwriter. A native of Shaw, Mississippi, Edwards retains the purist links to seminal acoustic country blues. He’s witnessed or worked with virtually every blues musician of note since the late 1920s, from Delta legends Charley Patton, Tommy Johnson, and Robert Johnson to Chicago blues icons Little Walter, Sonny Boy Williamson #2 (Aleck “Rice” Miller), and the Myers Brothers (Louis and Dave). Beyond his eyewitness accounts, however, is the Edwards’ musical retention: subtle yet captivating in a manner that appears simple, but in reality belies awareness of musical intonation and interplay.

Music was a fundamental part of the rural southern culture in the early 20th century. “We had guitars, pianos, violins, mandolins; most of the string music,” he recalled. People used to give country dances on Saturday night, and the musicians would come out and play. Through the week they would sit around the house and learn how to play guitar, and what they could do with it.”

Edwards recalled one of the musicians who taught several other artists. “Hacksaw Harmon, he was a ragtime guitar player; he played a lot of chords. I learnt a lot from him.”

If Edwards’ life reads like a “Who’s Who of the Blues,” it’s due in great part to his itinerant nature. For more than two decades (in the 1930s and 1940s), Edwards traveled extensively through the South, and made trips through most other parts of the country.

“Big Joe Williams ; he learnt me. He was the only person I knew that couldn’t read or write, but could go anywhere and wouldn’t get lost. He could get on a bus to New York and when it stopped, he’d look around. Next time through if he stopped in a different place, he’d say ‘this ain’t the place; it’s further on up this way’…Tommy Johnson…he made “Canned Heat Blues”—I knew him when I was a kid. I’d go down to Jackson with him; we’d play and drink Canned Heat (Sterno lighting fluid).”

Edwards also recounted his 1942 Library of Congress recording session with Alan Lomax (“paid me $20…then he went down to Rolling Fork and recorded Muddy Waters”), the change from acoustic to electric guitars (“it messed up the piano players”) and the once vibrant scenes on Maxwell Street, 47th Street, and State Street in Chicago (“the Dan Ryan Expressway tore down a bunch of ‘em…there were clubs all along State Street from 26th to 63rd Street; there ain’t nothing left now.”)

Perhaps Edwards’ most frequently-told story is as eyewitness to Robert Johnson’s last days. “I was in Greenwood (MS) when he died; that was 1938. I was 23 years old then. Me and Sonny Boy #2 left town about 10:30; 11:00 it was just three miles to Three Folks. We got there about 11:30 and Robert was sitting in a corner, holding his guitar…Robert started to going with this man’s wife. He lived in part of Greenwood called Baptist Town…and she had a sister who lived out there, and every Monday morning she would go out to ‘visit her sister,’ but she was with Robert…The man got on to it; he didn’t want to shoot Robert, ‘cause he’d go to penitentiary. So he decided to give him some whiskey that was poisoned to get him out of the way. He had a good lookin’ wife, and didn’t want to lose her.”

That Sunday morning Robert was taken back to his home in Greenwood; Edwards thought Johnson would recover. “I went over there Tuesday and he was cryin’, crawlin’ around people were trying to give him salt water to heave the stuff up. If he’d been given strychnine poison, he’d have died before then. Now, if it were today, the doctor would have pumped the stuff out of him; he’d have been all right. He died August 17th, on Wednesday. They put him in the ground Wednesday evening; his sister come from Chicago Thursday and had him dug up and put in a casket…He’s buried at a place called Star West, out on the way to Money, Mississippi.”

Far from a museum relic, Edwards still displays deftness on guitar. He also is a keen observer of other blues musicians, absorbing and translating material to match his style. Edwards is most aware of instrumental keys.

“Lonnie Johnson, he played a lot of C chords, and mastered the C key. Lonnie and Big Bill Broonzy were pretty close together with their style; they played a lot in C and G; they could master those keys. Most of the blues players now play in E and A. But D is a really beautiful key on guitar. I play a lot of D, and there ain’t too many guitar players in D tuning. The tone comes with a certain key, and sometimes different tones sound better than what you know. That’s when you try and throw your keys around, and see which ones sounds best. But you’ve got to learn how to play in them keys before you can do it. That’s how I learned; I’d play in G, then turn around and play in C, then turn around and play in E. They all have different tuning. You have to know the turn around for all the different keys. You have to do it in the same way you start out.”

Edwards also emphasized the importance of the turn around;  “You can play a couple of solos, slow down, then come back in with your turn around…a lot of (today’s players) still don’t know it.”

Biography by David Edwards still playfully experiments with the guitar, on- and off-stage. “I play a lot of time sitting and practicing at the house. You never learn what’s all on a guitar; I don’t care how good a guitar player you are. There’s always something you can find on there. Always something you don’t even know there.”

Edwards recalled his life stories for Janis Martinson and Michael Robert Frank in his 1997 biography, “The World Don’t Owe Me Nothing: The Life and Times of Delta Bluesman Honeyboy Edwards.”
He will perform with Paul Kaye on Saturday, November 15, at 2:00 PM, at the Folklore Village near Dodgeville.