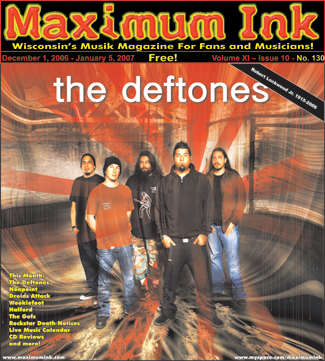 The Deftones on the cover of Maximum Ink December 2006

With “Saturday Night Wrist,” the Deftones have crafted their most rewarding offering to date. Haunting, hypnotic and heavy all at once, the album clearly showcases the band’s range. From the violent de-tuned guitar crush of “Rapture,” “Combat” and “Rats! Rats! Rats!” to the atmospheric yet disturbed sonic flight of “Xerces” and “Riviere,” they follow their creative impulses through rugged extremes. Despite a three year delay between records and a tense recording process, Stephen Carpenter (guitars), Chino Moreno (vocals), Abe Cunningham (drums), Chi Cheng (bass) and Frank Delgado (turntables) have emerged triumphantly and stronger than ever. Carpenter sat down with Maximum Ink to delve into his band’s latest metallic monolith and discuss their career.

MAXIMUM INK: You guys have always evolved with each record, but it seems like your greatest evolution has come with “Saturday Night Wrist.” Was that a product of having three years between this album and 2003’s “Deftones?”
STEPHEN CARPENTER: Well, we actually finished all of the music in May 2005 for the new album. Chino didn’t really start doing his vocals until October or November of that year. Then he didn’t finish them until June 2006.

MAX INK: Did you work on the music anymore in that period?
CARPENTER: No, when we were done, that was it. It’s been a bad thing that it took so long. However, I got to take up golf in that time, and I’m so stoked on it. I was able to get everything going on the right foot in that game.

MAX INK: Even with the break, the record is still your most cohesive. The whole album feels like a journey, similar to “White Pony,” but with even more of a focus. Was there an initial concept for the new album?
CARPENTER: We’ve never really had a concept for any of our records. We don’t have any pre-formed idea of what we’re going to do. Really, our songs are just snapshots in time of where we’re at. There is no master plan for what they’re going to be. We’re just writing what makes us feel good in the moment. Sometimes we write mellower stuff. Sometimes we work on heavier, edgier stuff. We just take it as it goes and don’t try to force anything.

MAX INK: You set a blueprint for dynamic heavy music with 1995’s “Adrenaline” that many bands have followed, including bands like Dredg and Underoath. How does it feel to see your influence in so many different artists’ work?
CARPENTER: It’s cool, and I’ve got nothing but respect for those who can dig on our songs that way. It’s the same for me. I’m still moved by music. I met Meshuggah for the first time earlier this year, and that was a bit trippy for me. I sort of kept my distance from those guys, because their music means so much to me. Now I know that the guys behind the music are cool dudes. I don’t call them up and hang out with them every day or anything. However, it was nice to talk to them, and I was stoked to meet them.

MAX INK: Well, you can definitely feel Meshuggah’s influence on the heavy riff buildup that you play in the middle of “Rats! Rats! Rats!” on “Saturday Night Wrist.”
CARPENTER: It could be construed that way, for sure. That’s the beauty of music. It comes full circle in so many different ways. It’s almost impossible to keep track of it. I think it’s really cool that our music touches people that way, but I can’t keep track of who we’ve influenced. It’s just an honor to be able to influence other bands.

MAX INK: You handle programming and play other instruments on new songs like “Beware.” In terms of song construction, are you usually playing multiple instruments?
CARPENTER: Well, on “Beware” I play guitar for the intro, then I switch to keyboards, and then I finish the song on bass. However, I wrote “Cherry Waves” on drums. I also play drums on the instrumental track [“U, U, D, D, L, R, L, R, A, B, Select, Start”]. That song’s got the super-fucking-crazy-name that no one’s going to remember [laughing]. The only way you’ll remember that is if you’re a video gamer, because it’s a code for infinite life and health in some game [laughing].

MAX INK: With your multi-instrumentation and the band’s further experimentation this time around, where does the new album fit in Deftones’ catalog?
CARPENTER: We’ve just evolved and lived through so much in the last few years that the music’s been a nice escape for everyone in a way. Four out of the five of us have gone through divorces in the last four years. Some are still going through that process. So it’s just been a real emotional rollercoaster throughout this time. The music is just a reflection of our feelings, really.

MAX INK: Well, you have those beautiful moments of melody on the slower tracks like “Xerces,” but there is always an underlying sorrow.
CARPENTER: I think we’re all seriously emotional and sensitive guys. You wouldn’t know it looking at us, but we really care about lots of things, especially our music. Focusing on the music, the passion to make sure our songs sound good, drives us. We try to take songs and work on them to the point where they’re good enough for all of us to enjoy. It’s not that way for every song, but 99 percent of the time it is. For example, “Pink Cellphone” is all Chino. He made that entire song on his computer on Garage Band.

MAX INK: Given that group dedication, every elementfrom the rhythms to the vocalshas been heightened on these new tracks. You’ve also further honed your guitar playing sound, juxtaposing that heavy distortion with spacey tones even more. How would you characterize your playing?
CARPENTER: Honestly, my playing is just what I interpret this style of music to be. The way I describe it is I’m playing an acoustic guitar style, but with distortion going through it. There’s a lot of strumming, but rather than playing traditional chords, I mix notes up so there really isn’t a traditional chord. I consider my style to be more of an acoustic style that happens to be running through an amp. Simultaneously, I’m not really a big fan of acoustic music [laughing]. I don’t despise it, but it’s just not my preference. If I had a choice between picking up a guitar that’s plugged into an amp or an acoustic, I’m picking up the one that’s plugged into the amp. You can be powerful with an acoustic, but with the amp you’re dealing with an electrified sound, and the sky’s the limit on that. You can really manipulate tones with an amp, whereas with an acoustic, it’s just the dynamics of hard and soft.

MAX INK: Did you do anything differently with your guitar playing on “Saturday Night Wrist”?
CARPENTER: Honestly, the biggest thing that I did differently on this was sit back and let everyone else do something. I told everyone that I’m tired of playing the guitar riff at the beginning of the song and waiting for everyone to come in. Ninety percent of our music starts with one of my riffs. I cut back and told everyone that I’m going to stick to playing on the heavier parts, and I’m not starting off any songs. So someone else had to start, or these tracks never would’ve happened. With each record, slowly but surely, the other guys have started to speak up and contribute. I really like the way the new record sounds. It’s really just the next step to where we’re going. We honestly still have so many ideas that all of us want to do. We’re starting to communicate a little more openly with each other, and there aren’t as many barriers as there were before. We’re not as quick to fight with each other. We’re growing up. Are we all the way there? No, but we’re going in that direction. The more we get along and the better we get along, the more creative the music will come out.

MAX INK: Are the bonds between you guys stronger than ever now with everything you’ve gone through with this album?
CARPENTER: Certainly. One thing’s certain, if you know how to be in a relationship as long as we’ve been in a relationship—the five of us for almost twenty years—that’s just something all on its own. As a group of friends, we’ve gone through a lot of things and stayed together. Longevity is based on the willingness of a group of individuals to continue doing something, whether it’s popular or un-popular. It’s just opinions at that point anyway. Popularity will always go in waves. I just do this because I enjoy playing the music for our fans.

MAX INK: You’ve always had a real diehard fan base since day one, too.
CARPENTER: Totally, I give credit to our fans all the time. We assume that our fans are intelligent, and they don’t want the exact same record over and over again. It’s all about twisting it up. It’s so easy to do what everybody’s doing, but why do that? Let’s try something else and find out if it works. The worst we could do is fail. If that’s the worst that could happen, well, everyone makes mistakes.