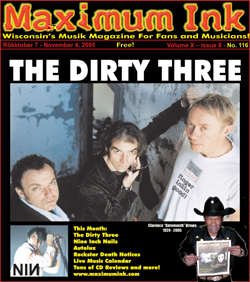 I had no idea what to expect when I got to the door of the East End, the short-lived club on Madison’s east side in the mid-nineties. I was there for the Man… or Astro-Man show as they were on the cover that month. What I didn’t know was that the opening act, The Dirty Three, would be a band I would love for years to come. That was October of 1996.

Prior to the show, I hadn’t heard much about this Australian band, except that they traveled around the country, in an old, black Cadillac, going show to show without breaking. I’d heard stories about the band’s leader and violinist Warren Ellis, and his love for whiskey.

When I ran into him at the show, bottle in hand and wearing black, he was just as mysterious and foreboding a figure as I’d heard about. In fact, they were all very quiet.

As the show started, the lights came on to reveal little emotion from the unique three-piece band consisting of drums, guitar and violin. The band started with some light clean guitar chords, played very plainly. A beat followed along, sluggish and almost out of time as a somber violin faded in.

All at once, Ellis leapt off the stage and upon landing broke into a violin solo that was as emotional as action packed. The man can play violin like no other violinist I’ve heard, certainly not “classical” music.

Between songs, Ellis would go to the microphone to tell an interesting story, dead pan style that would go something like, “This song is about when your girlfriend leaves you, and you don’t take a shower for a week and lay in bed waiting for a boulder to fall and crush your head.” The band would then break to their next instrumental song just to get back to another dead-pan anecdote from the crazed violinist.

One part experimental-jazz, one part rock n’ roll, one part dead-pan comedy and one part that I can’t identify, Dirty Three’s cocktail is unique, dark but very tasty.

I told this story as I was overlooking the shoulder of Tammy from the calendar team as she was harvesting the Metro Chicago’s live music schedule for the month. Ironically, I had put D3’s first CD, Horse Stories, in the player. Being intrigued by the story and the music playing, she went to www.pollstar.com to see where else D3 were playing live.

Their current schedule matched my profile of them. October 8th the Dirty Three start in Seattle, then Portland, San Francisco for two days, and then LA by the 13th. A travel day off and the band is in Chicago by the 15th, Boston by the 16th and New York to finish the US part of their tour by the 17th.

I was taken aback, that is one crazy touring schedule, no wonder artists collapse on stage all the time from exhaustion. A two week vacation, if you could call it that, and they continue their tour on Halloween in France, then trekking daily through Europe hitting Amsterdam, Belgium, Ireland, Britain and then ending the Euro-tour in Barcelona by November 27th. D3 end up in their home country of Australia for a show in Sydney on December 3rd. Now that is a tour! I hope they rest a little after that.

All of this relentless touring is to promote their newest and 7th album, Cinder, which features new dimensions of the Dirty Three, adding instruments like piano, organ, bouzouki, mandolin, bass guitar, viola, and bagpipes to their drums/guitar/violin three-piece. Traditionally an instrumental band, Cinder also finds the addition of voice. Sally Timms of the Mekons appears as well as vocalist Chan Marshall.

To sum up the Dirty Three, Warren Ellis states, “our greatest success is that we continue to make recordings and concerts, 14 years after our formation. The hunt is still on and the chase is still there.”

Catch the Dirty Three live, their closest show to the Max Ink area is in Chicago on October 15th at the Metro Chicago’s Smart Bar with Freakwater.