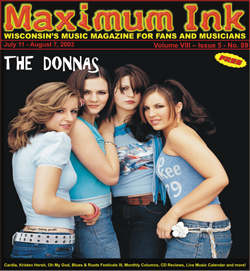 the Donnas on the cover of Maximum Ink in July 2003

The Donna’s were formed in 1997 in Palo Alto, California when high school outcasts Brett Anderson (vocals), Torry Castellano (drums), Maya Ford (bass) and Allison Robertson (guitar) picked up their instruments and started rocking out in a raw, in-your-face, aggressive AC/DC Ramones style. They all used the first name Donna.  Since then they have released 5 full length CD’s and are now filling up the big halls with their devoted fans, but still the press has not taken them to their heart, dissing their songs, appearance and playing. I spoke to guitarist Allison Robertson via telephone when the Donna’s were on tour in Chicago.  She was smart, funny and talkative.

Maximum Ink: You seem to exclusively use Gibson Les Pauls?

Allison Robertson: I have another guitar that I using called the Gibson Sprirt.  It’s like a Junior body but instead of P90’s has a humbucker in it. It just came like that. It was like a failed idea for Gibson in the 80’s and there aren’t very many of them, but they’re not worth a lot of money, they’re just rare. So I have that guitar now and I’m trying to get it to sound as good as my standards.  I have a 69 Black Beauty Custom that has been sanded down so it’s not actually black. I got it for a really good deal and it sounds great. I don’t have too many vintage guitars because I can’t really afford them.  If I had that money they’d all be vintage.

MI: Isn’t the money rolling in from the big record deal?

AR: Well, I think that we took a different approach with this record deal. It wasn’t like how big we can get our advance to be because my dad was in the music industry and he did that whole big advance thing and I got some pointers on how not to blow your wad.  You get all this money in the beginning and then you have to pay it back.  Of course everything is recoupable nowadays. We were just really careful and we were more interested in getting power and leverage than getting the right advance. Of course it’s not like we didn’t look out for the financial part but that wasn’t a priority. Most bands, especially young bands just take the money and then they’re in the hands of the label. With us we took less money just so that we have control over the videos for instance. We wrote the treatments for both videos. The album cover art, like all those things that people think that the band thought of but a lot of the times they don’t anymore.  All that stuff is our ideas completely.

MI: The press disses you a lot. Do you have a theory why?

AR: People also comment on not just being girls but being older and like are you going to be singing these songs when your are 40?  How come AC/DC, Aerosmith, Rolling Stones , all those bands sing about being 18 and doing all their groupies? How come they can do that when they are 40 or 50, but we can’t?  There are a lot of women that limit what they think that we should be capable of. More than half of the articles [about the Donna’s ] that I’ve ever read that were derogatory were written by some woman.

MI: Why do you think that is?

AR: Female writers, especially in music feel that they are doing something good for women. Like they are writing from a feminist viewpoint standpoint so they feel that when a girl band comes along, especially one like ours where we’re not preaching, we want to appeal to everybody, not just girls.  So many of those female bands are all about their message, but to me, you’re not sending the right message to men when you can’t play your instrument.  You might be saying something really smart in your lyrics, but if you can’t fucking play your guitar then you are just setting women back 50 years.

MI: What is your dream guitar?

AR: A Wineburst Gibson Melody Maker. I find Melody Makers all the time, but not in that wine color, that dark red burst and on top of that people take out the pickups, they’ve all been modified, they don’t have original pieces or the neck. So I’m just looking for an original and that’s going to be impossible to find.