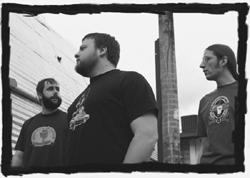 Madison's own Droids Attack in Maximum Ink in December 2006

In an age where music bands are defined by their range of MySpace graphics and anyone that can strum a hackneyed power chord is a rockstar, it is no wonder that originality in local bands today is alarmingly scarce. Droids Attack is, however, the exception.

Droids Attack consists of Madison’s rock triumvirate: lead vocalist and guitarist Brad Van, bassist Nate Bush, and drummer Tony Brungraber. Droids Attack’s premier album, “All Your Chicks Are Belong To Us” garnered much deserved recognition in the punk-metal realm of the Midwest. In 2004, the album won a MAMA (Madison Area Music Award) for Best Punk Album.

Currently, the band is promoting their sophomore album, “Fatal Error,” due to be released in late 2006/2007. Fatal Error maintains the same rhythmic foundation of the first CD, but with tighter riffs and a distinctly sharper sound.

Those familiar with the Madison music scene may remember the latter days of singer Brad Van’s former band Dayzie Head Mayzie. After years of revolving members and futile efforts, the band dissolved for good. “In a way, I kind of outgrew the pop rock material that we were playing…I had to book all the shows, which wasn’t easy,” Van explains, “with this band [Droids Attack] I was more focused, I had an approach, and understood that we needed to find our niche. When we started playing, it was just took off from the first club we played they wanted us back. This lets me spend more time on writing, promoting, and helping out the band.” Van’s undeniable knowledge of band success stems from years worth of experience, practice, and an inextinguishable drive. As a boy, Van received his first drum kit from his mother as a Christmas gift, and his brother received an electric guitar; naturally, the duo wanted to start a rock band. Jamming to classics from Motley Crue and Metallica, Van began to learn the subtleties of rhythm in hard rock. “I loved Tommy Lee; he was my favorite. I thought his style of drumming was spot on – a lot of the Motley Crue tracks were straight forward, but he would always throw in a little pocket, a nice rhythmic accent.”

As a teenager, Brad Van began his immersion into the Madison music scene, joining local bands as a drummer, “we would play a few gigs, build up material, then break up. I have hard work ethic, and that would kind of devastate me, especially after all the practicing,” Van explicates, “I would often try to communicate ideas, but most of the time it was just frustrating, because nobody wanted the drummer to tell them what to do [laughs]. So I figured that I needed to learn how to play guitar.” In high school, Brad’s perceptive ear made it easier for him to pick up popular licks on the guitar. By age 19, the insatiable musician began to compose his own music and lyrics, “the alternative rock scene was huge back then, and you would have to sing. I didn’t really like my voice very much, but when I wrote something with guitar-thrashes and screaming, people said I had a great punk rock voice, so I stuck with it.”

After a two-year hiatus from performing in a band, Brad and future Droids drummer, Tony Brungraber, met in a videogame store, exchanged numbers, and then tempted fate. “We just started jamming about once every other week, nothing serious,” Brad said. Following a four-year hunt, they found precision in bassist Nate Bush—the trio was complete.

“We’re into a lot of different genres,” Van says, “Tony listens to a lot of electronic music, Nate is into math rock, and I am more into metal, like Helmet, Clutch…I think that’s what makes us work well—we’re all open minded.” Diverse musical interests are part of what melds Droids Attack’s distinctive vibe. Their upcoming album features songs such as “The Lord” and “Blood of the Earth,” which boast heavy, head-banger grooves, Black Sabbath-style. Yet the cascading guitar solos on tracks such as “Steven Seagall” and “Scythe in the Fire” have a resonating, infectious effect. However, the unquestionable backbone of the sound is found in Tony’s drums. The thunderous, circular rhythms give the songs tight, alternating twists, always with a metal edge. Van’s vocals reinforce the strong punk influences. Screaming as if competing with his guitar for sound, Brad Van conveys a powerful sense of anguish and passion through his raspy pipes. Droids Attack’s sound hearkens back to the roots of rock n’ roll, while still incorporating a fresh twist. Rhythmically, the band produces solid beats like pulsating thrashes—no doubt an attribute to Van’s melodic prowess.

“It took me a long time to learn, but you’ve got to be consistent,” Brad says of playing in a band, “You need to establish a sound as a foundation for what you’re going to build on—that’s exactly what we did with Droids Attack—and it’s working!”