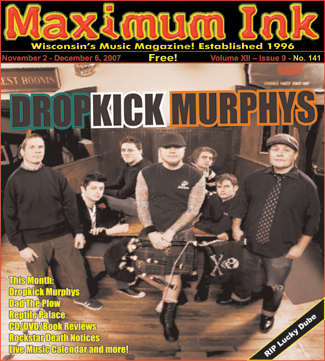 Dropkick Murphys on the cover of Maximum Ink November 2007

Coming from a working-class background in Boston, The Dropkick Murphys have not forgotten that life. Having been successful with fans and critics, the band has had one hell of a ride, highlighted in recent years by Martin Scorsese using their song “Shipping Up To Boston” in his film “The Departed” in 2006, and writing the theme song for the Boston Red Sox in 2004.

“The Meanest of Times” delivers the band’s trademark Irish-infused punk, with the central theme of family tying the album together. The album also marks the launch of the band’s label, Born & Bred Records. In the midst of their current tour, vocalist Al Barr took time out to talk to Maximum Ink.

MAXIMUM INK: Most people describe your music as punk music. Do you really think that fits?
AL BARR: Opinions vary. For me, we have the ferocity and the backbone and the ethos of punk.

MAX INK: How did you decide to put the Irish music in with the punk? Are you guys all of Irish descent?
BARR: You’re talking to the one guy in the band who doesn’t have any Irish blood in him! Everyone else in the band has got some Irish blood in them. The first song that the band wrote, “Barroom Hero,” had bagpipes on it. We could have always done it in the studio, but we decided that if we couldn’t recreate that onstage then it was kind of cheesey.

MAX INK: How surprised have you been by all the critical success that the band has had?
BARR: You never know where things are going to end up. It’s never something that we would have bet on, to be involved with the Red Sox or have a song in a Martin Scorsese film. It’s definitely been very cool.

MAX INK: Is critical success more important than having a hit with fans?
BARR: Absolutely not. I’d rather have the critics saying that the album sucks and make sure that the fans were happy with it. We write for ourselves and for the fans, not for any critics. At the end of the day, that’s just somebody’s opinion.

MAX INK: Since your song appeared in “The Departed,” how much has changed for the band?
BARR: We keep it in perspective. We’re a punk band playing fucking rock and roll. I’d be foolish to think it didn’t open us up to a wider audience. We are finding that a lot of people are downloading “Shipping Up To Boston,” but are those same people buying our music? That remains to be seen.

MAX INK: Downloading music is fast becoming the way that many people hear songs, and even buy them. How do you feel about this and what do you think it means for the music business?
BARR: I guess that’s cool and hopefully those people like it enough that they’ll go buy the record. It is definitely affecting bands and the face of music in general. I think it’s the shape of things to come and that the music industry will have to accept it.

MAX INK: If you could invite three musicians to guest on the next album, which three would top your wish list?
BARR: I would say Tom Waits, Steve Earle and Bruce Springsteen.

MAX INK: Which song on this album has the most personal meaning for you, and why?
BARR: “God Willing” has a lot of meaning, but I think they all do. It sounds like I’m taking the easy way out. My favorite song on the album is “Surrender.”

MAX INK: What’s the best part of your career?
BARR: Being able to go all over the world, playing music that you love to people who also love it is probably the greatest thing in the world. This is a realization of a dream.

MAX INK: What’s the worst part?
BARR: Being away from my wife and my child for a long time. But, when I’m home, I’m with them 24/7. Imagine being away from your child for weeks at a time, not being able to see them.

MAX INK: Being in the music business is hard. How much harder do you think it would’ve been for you if you didn’t have the support of your family?
BARR: My family always supported me in the sense that they gave me love and affection and were proud of me. I think they always worried, too, because it’s a tough business to break into. Success for us is being able to pay our bills with our music. That can all change tomorrow.

MAX INK: Were there any moments early on where you wondered if it was worth it?
BARR: Oh yeah! There’s times when you think, “Shit, is this worth it?” You have to look back at what you were doing before and what it took to get where you are. You get to a point where you throw caution to the wind and take a chance.

MAX INK: What advice would you give kids who want to pursue a career in the music industry?
BARR: Be ready and willing to pay your dues and suffer a lot, and it still may never happen. You just can’t give up. You have to believe in yourself, when no one does and everyone else says you suck.