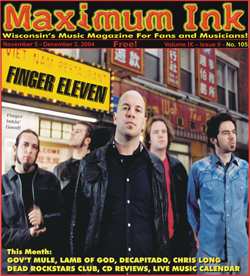 Finger 11 on the cover of Maximum Ink in November 2004

A band known for their ingenuity in songwriting, and amazingly energetic/enigmatic live shows, Finger Eleven are five seasoned rockers who continually seek new tour opportunities to share their music. Their third album, “Finger Eleven,” is a product of Johnny K (Disturbed), foosball, beer, and cigarettes. If you were lucky enough to get the limited edition DVD that came with their rare DVD/CD combo, you can peek into their world.

The DVD portrays aspects of the band rarely seen: The long hours in a studio away from home, and the hard work involved in creating and producing a record from the ground up. You can see first hand how much work went into this project. FE has been feverishly touring since 1995 throughout their homeland of Canada and the United States. If you have not seen this band live, you are missing one excellent and superbly energetic live show.

In the beginning, when the original members of FE were in high school, they were music nerds who decided to form a band for their high school’s Christmas talent show. They prepared three cover songs and rocked their school. Scott Anderson, vocalist, explains what happened, “After the Christmas show no one told us to stop playing, and we kept coming up with ideas and creating new songs.” After that show, they continued as a cover band called Rainbow Butt Monkeys for about six months because it was the only way to get gigs in their hometown of Burlington, Ontario.

During the six months of cover band status, they began to come up with great ideas for original material and began to phase out the covers to play all original music.Rainbow Butt Monkeys won a radio contest, recorded their first album, and began touring in Canada.  They started working on the record that became “Tip.” The material did not have the same funky feel or sound of the Rainbow Butt Monkeys so they collectively decided to change their name to Finger Eleven. Family and friends told them they were foolish to change their name because of their recognition, but the band believed the new record was so different that people would not get it if the Butt Monkeys name was on it.

Scott felt sure that they were doing the right thing: “The music will be what justifies our existence,” he said.  Their Canadian label evidently had other ideas. The label released the record, but one month later dropped it. Scott explains: “The label didn’t get it.; we seemed to be the only ones who believed in the record. So we looked to America and found Wind-Up Records.  We re-released the album through them the following September.” The album “Tip” received a better reaction in America and the band was up and running with their new career on Wind-Up. “We believed in our music and we loved it. If you are in it for the money, people can see through you,” Scott stated with a sigh. “…But if you love your music and believe in it, then people will love your music and believe in it too.” Scott also added, “You only have control over what you love and create with your buddies.”

Their 3rd and self-titled “Finger Eleven,” is now available, as is their first album “Tip,” and their second album “Greyest of Blue Skies.” If you are in a band and you want to sustain a living, Scott has advice: “Don’t let life get in the way. Don’t worry about your part-time job. Be there for the right reasons. Have your dorky convictions, love your band, and keep writing.  Be aware you are going to be told everything from how much you suck to how great you are. Most of all, love what you are doing.”

With ten-plus-years into their career, the band is writing and touring the United States and Canada (and loving it). While on the road, they say they can’t get enough video games.. their faves are Halo and Tony Hawk’s Underground 2. But there will be less time for gaming now with tracking demos for the next album.

Our conversation ended as Scott was driving to the studio to record more ideas for the forthcoming album due in mid 2005.  Then it will be back to X-Box, and the road.