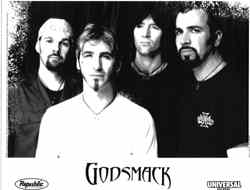 Godsmack’s drummer, Shannon Larkin freely admits, “The original intent of our acoustic record was selfish. We just wanted to do it for ourselves because we enjoyed it, but we were lucky enough to raise the ceiling and be allowed by our fans to do an acoustic tour.” Allowed seems a funny word when talking about it because at the time he was talking about it, the Orpheum Theatre in Madison was filled to capacity with a crowd of hungry Godsmack fans who absolutely demanded to hear the “other side” of Godsmack’s now-immensely popular alternative (not quite nü, but different from old school) metal. The night before they had played in Green Bay doing their full electric set opening for the Metallica juggernaut and you could recognize many of the same faces had traveled to Madison to see their acoustic show (even the same WI GODSMCK license plate was seen in the audience.)

And that softer aspect seems a natural progression for the band. They’ve always seemed to take their mark from Alice in Chains, who were one of the first bands to mix the dark heaviness of Black Sabbath with the burgeoning Seattle grunge of the late 80’s. Alice in Chains delivered two successful acoustic records in the early 90’s and Godsmack’s acoustic album, “The Other Side” seems to flow as naturally from the Boston-based band as those albums did from their Seattle ancestors.

With a massive Godsmack sun logo (recognizable from the cover of their self-titled major label debut) and enough candles onstage to make Aleister Crowley jealous, the mood was set more for a relaxed night and indeed, everyone remained seated throughout most of the concert. Singer Sully Erna answered questions from the audience after every few songs, revealing some of the inspiration behind songs like “Running Blind” and “Re-Align” where the attitude is less of the ass-kicking of “I Stand Alone” and more about trying to keep a normal attitude while riding the rock n’ roll stardom roller coaster. He let the crowd come up to the front of the stage to rock out at the end of the night for the 1998 classic, “Keep Away” and even brought out a harmonica for an unexpected final blues jam(!)

“We feel really blessed, “ Larkin said, “Other bands, like Slayer, can’t expand musically, because they didn’t try it early enough. If it weren’t for ’Voodoo’ we couldn’t do this. Our fans embrace this side of us. We didn’t expect anything and now [the record]’s gone gold.” And embrace they did, when the show was over, the crowd was still screaming the band’s name. Even if the set wasn’t metal, the personal connection they make with their fans is more powerful than a distorted guitar.